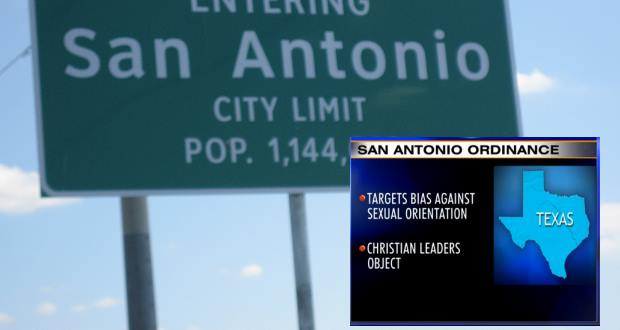 It appears that rally one day before voting day by city council on the Non Discrimination Ordinance (NDO) worked. A number of local prominent civil rights leaders gathered on the back steps of City Hall Wednesday to show their support for the proposed ordinance.

Hosted by the Esperanza Peace and Justice Center, the meeting was originally scheduled to take place in front of City Hall, but reportedly religious protesters refused to give up their place to the supporters, the group moved to the back of the building where they met for an hour and took turns expressing their thoughts about the proposed reform.

“San Antonio, it has been reported, has the highest percentage of same-sex parents in the nation,” Hinojosa said during the gathering. “But that does not matter. What should matter is the city of San Antonio’s interest in protecting and treating everybody equally.”

The ordinance seeks to amend the existing (NDO) to include homosexual and transgender individuals, since they are not currently protected by law against discrimination.

“It’s an ordinance that says something very simple that the city has stood for, for many years: ‘Respect all communities,’” Ca- marillo said. “It doesn’t change anything. I expect Councils 1-10 to vote in favor of it. I expect my councilwoman, who is Elisa Chan, despite her comments, to do the right thing.”

Video: Innovators share ideas on transforming the future of learning — so everyone learns
Comment
Important Issues to U.S. Hispanics: Add sea level rise to the list