Forum Takes On Homophobia Among Latinos 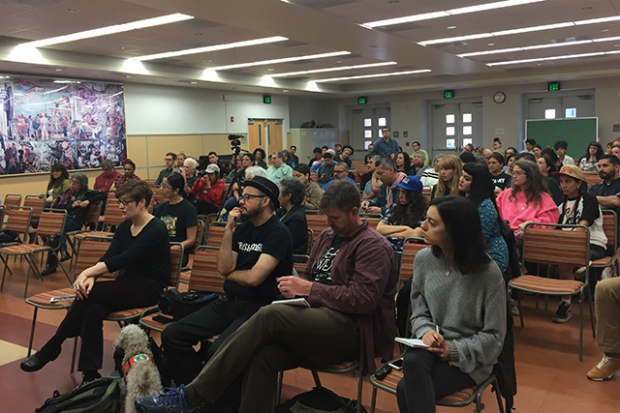 The artist whose mural on LGBT love that has been vandalized at least four times said on Saturday at a community forum that he failed to foresee the impact and called the vandalism an attempt to “erase” the homosexuality that is a part of Latino and cholo culture.

“All of a sudden it got vandalized, and I realized I was in this bubble,” said Manuel Paul, a Los Angeles artist who came up for the forum held on Saturday morning and sponsored by the Galeria de la Raza. “Once it broke out into the real world it got really scary.”

Paul drew inspiration from his personal nostalgia of growing up as a gay man in a Chicano household while creating a mural depicting queer ‘cholos’– a strict taboo in the Lowrider culture that he aimed to challenge.

“What I learned (from the vandalism) is that they say it didn’t exist,” said the digital artist who is a member of the Maricon Collective, a group of queer Chicano artists and DJs that celebrate LGBT people of color through art and music. “But I was around it. I grew up with all of this, and they just want to erase it and keep erasing it–and they burned it down to try to erase it again.”

Vandals made their disapproval of the mural’s subject matter evident with multiple attacks in just a month’s time–the last resulting in a late night fire that destroyed a third of the mural and endangered residents who live above the Galeria at 24th and Bryant streets. Others vocalized their opposition in a flurry of social media posts.

“The dialogue through social media really turned me off the internet because there was so much negativity being spewed out,” said Paul. “ Reading all these comments, they’ve made their message really clear.”

Social justice artist and educator Nancy Pili, who was also on Paul’s panel at the Mission Campus of City College, called the destruction of the mural ‘reactionary vandalism.’

“All of the murals that I’ve ever worked on that have gotten on the front page have never been me painting flowers,” said Pili. “That’s part of the push that public art does – we take public space and we assert the fact that we exist.”

The panels on Saturday were…