Hispanics and the Civil War

Editor’s note: Last month the National Parks Service commemorated National Hispanic Heritage Month with a publication entitled Hispanics and The Civil War. The following essay is excerpted from that handbook which is available in many National Park bookstores or may be purchased online at www.eparks.com/store.

The Civil War. For many Americans this conflict evokes images of the storied battlefields of North and South and of dramatic changes in the lives of Americans of African and Anglo descent. Lesser known is the story of the people of Spanish ancestry who participated in this epic conflict and of the many battles that took place in the West, in areas of large Hispanic populations and strong Spanish heritage. 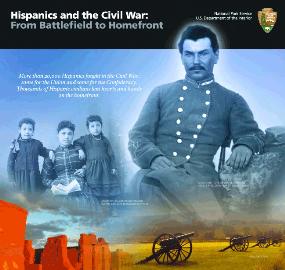 Like all Americans, Hispanics were deeply affected by the Civil War. When the conflict erupted, they lived in all parts of the country. Some traced their ancestry to explorers who settled in North America generations ahead of the English. Many had suddenly found themselves classified as Americans when the United States expanded its boundaries. Others were recent immigrants from Spain and Latin America, drawn to the United States to improve their lives. When the nation split in two, many were forced to choose whether to support the Union or the Confederacy. Some had little choice as they were swept into the maelstrom.

From the first shots at Fort Sumter, South Carolina, in 1861 to the last action at Palmito Ranch, Texas, in 1865, many Hispanics made a conscious decision to join the fight: some for the Union and some for the Confederacy. They responded to a variety of motives, public and private. They represented all socio-economic levels, from wealthy aristocrats fighting to preserve a way of life to impoverished laborers seeking to improve their fortunes. By the close of the war, more than 20,000 Hispanics had participated in the bloody conflict and thousands of Hispanic civilians had lent hearts and hands on the homefront, weaving their own individual stories into this important national fabric.

Soldiers in the Southeast- In the Southeast, Hispanics commonly supported the Confederate cause. Many of Spanish ancestry lived in the Gulf Coast region of Alabama, Mississippi, and Louisiana-lands that had once been Spanish West Florida and Louisiana. This population represented a rich mixture of cultures and languages: French, Spanish, Caribbean, American Indian, African, German, and Anglo American.

These “Creoles” were often well-to-do planters with plantations or established merchants with homes in the bustling ports of New Orleans and Mobile. Many held slaves. Others made their money through the cotton trade that relied on the “peculiar institution” of slavery. Part of the aristocracy of the region, these citizens joined their like-minded southern neighbors and actively fought to preserve their way of life.

Soldiers in the North — Not all Americans of Spanish ancestry lived in the South. Northern states also had significant Hispanic communities, and many of their members supported the Union cause. Most came from large urban centers like Philadelphia, New York, and Boston. In addition to large populations of Germans, Irish, and Eastern Europeans, these cities attracted immigrants from Spain, Portugal, Cuba, Puerto Rico, and Mexico. Many of these newcomers sought to integrate themselves into the society of their new homeland but faced daunting racial prejudices. Serving in the uniform of a US soldier was the quickest and best way to reach their goal of becoming an “American.”

Sailors: North and South — Some of the most dramatic fighting of the Civil War occurred on the high seas where Hispanics fought with valor in the navies of both sides. Dozens of Hispanic sailors served on Confederate vessels, helping in the dangerous task of breaking the Union blockade of southern ports.

One of the most famous naval commanders in American history is David Farragut. Born to a Spanish father and an American mother, Farragut was raised in Tennessee and began his naval career when only nine years old. He served in the War of 1812 and the Mexican War and was 60 when the Civil War broke out.

Farragut is perhaps most celebrated for his capture of Mobile Bay in 1864. There, in the midst of battle, Farragut showed his disdain for the opposing fire by uttering the order that has been famously paraphrased as “Damn the torpedoes, full speed ahead!”

Soldiers in the Southwest — By far, the highest levels of Hispanic participation in the Civil War occurred in the states and territories of the Southwest. Following the war with Mexico (1846-1848), the victorious United States acquired vast portions of Mexico’s northern territories.

More than 100,000 Mexicans lived on these lands and with the stroke of a pen became citizens of the United States. These residents of Texas, California, Arizona, and New Mexico soon found themselves immersed in a national dispute over the expansion of slavery into the West. When war erupted, they had to choose sides.

They often faced difficult choices. Slavery had been banned by the Mexican government and only a few dozen enslaved African Americans lived in the arid lands of west Texas and New Mexico. Many Hispanics opposed the idea of bringing the institution into their homeland and endorsed Union efforts to prevent it.

Nevertheless, owners of crop lands in New Mexico — a group that included some wealthy Hispanics and Anglo Americans–often relied on the coerced labor of American Indians and shared some of the views of their slave-holding counterparts in the South.
The result was a scattering of loyalties. Texas became…

Civil War, featured, Hispanics, US history
Previous Post Intrn'l Video: Award-winning Latino writer goes to El Salvador in search of family roots and the origin of his mother's tamales
Next PostGuest Voz: When it comes to the environment, Latinos not the 'sleeping giants' Corporate America believes

Intrn'l Video: Award-winning Latino writer goes to El Salvador in search of family roots and the origin of his mother's tamales
Comment
Guest Voz: When it comes to the environment, Latinos not the 'sleeping giants' Corporate America believes