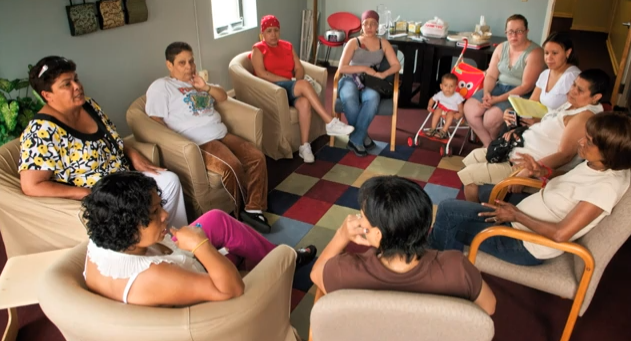 Before the DIVAS program was formed, women with cancer in the Hartford area who only spoke Spanish were hard pressed to find support. It was when Sotera Davila, who was suffering from cancer, pointed out the the gap to her nurse that the group began to take shape.

Through leadership from the Hispanic Health Council and grassroots community support, DIVAS, “Damas Informadas, Valientes y Airosas Superando el Cancer” or “Informed, Brave, Lively Women who are Overcoming Cancer” was formed in 1999, a few years after Davila, who was originally from Puerto Rico, made the observation.

Davila, who passed away in 2008, became one of the charter members.

What started out as the Hartford area’s only Spanish-language cancer support group for Latinas, with just enough money for a 10-hour-a-week consultant to run the program, has since grown into a comprehensive bilingual case management, social support, and referral service.

Awilda Maldonado, who works as the Early Detection Program Coordinator at the Hispanic Health Clinic in Hartford and coordinates the DIVAS Latina cancer support group, said she is “blessed” to be in her position.

“It’s amazing to hear the women’s stories about the struggles they have faced throughout their cancer diagnosis and treatment,” she said. “I’m very honored that the services offered through the DIVAS program are able to help them understand and face their journey through the disease.”

Too often compassion is left out of cancer treatment, Maldonado said. With the DIVAS group, coming into the group is like coming in a family.

“We take you in, and there is a lot of compassion. Everyone’s feeling what you’re feeling. We know exactly what you’re going through.”

One of the most important lessons Maldonado has taken away from her work with DIVAS is the urgency Latinas should have in educating themselves about cancer. Connecticut has the highest incidence of breast cancer in the United States – approximately 3,000 women in the state will be diagnosed this year – and Maldonado is adamant about education and early detection…