Latina Lista: News from the Latinx perspective > Local News > Washington DC > Ninety-year-old only surviving veteran in Delaware of the Borinqueneers

Ninety-year-old only surviving veteran in Delaware of the Borinqueneers 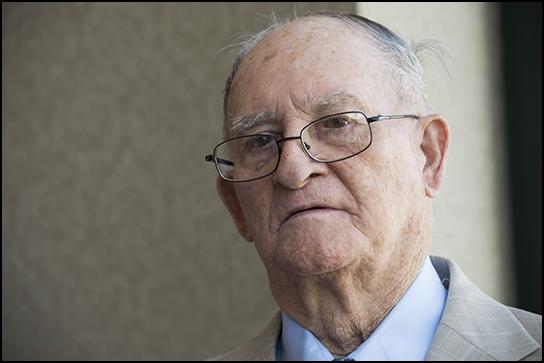 Manuel, fondly called by his friends Manolín, was born on May 4th, 1924 at four in the afternoon at Corozal, on the island of Puerto Rico. In the central town of the island he lived until he was 10 years old when his father, a hard worker, believer and stern man, decided to move the family Río Piedras, near the capital, San Juan. In Corozal his father owned a small farm that was just enough to feed them, and the older brother who had settled in San Juan got him a business, a grocery store where he worked until his death.

Manuel is the seventh of ten children. “Our parents worked very hard to raise us with what little they had, and with little intellectual preparation. The old man had only third grade, and my mom learned to write by herself and then educated the children of the neighborhood in catechism.”

He had a quiet childhood, studied only through eighth grade while helping his father in the business… until he was 18 and the next day he was called to military service and had to serve. It was the fourth of the brothers who was called to the armed forces, the oldest three were sent to Panama and he was sent to Europe, after training in Vega Baja, PR at Camp Tortuguero which was named after the many tortoises that inhabited the place. “But they called it Tortuguero because the training here was very strong, a torture.” After about 8 months, in 1944, was sent to Aruba with a battalion that would be in charge of the protection of the oil refinery because German submarines were sinking oil tankers in route from Venezuela to the island.

He was 19 and was sent with another 7,000 Puerto Ricans to Europe. “When we landed at Marseilles in the winter of 1944, we had a huge snowfall that same day that buried us, tents and everything. I was frozen and had to be taken to the hospital. I wasn’t there long.”

His stories of war are nice. He remembers a time when his platoon was sent to a snowy mountain road where only one car fitted. This was in the Alpes Maritimes, “I was there four months shooting the enemy in scattered skirmishes against the Germans. I was lucky that at that time, Hitler had not made a bullet with my name…