Latina Lista: News from the Latinx perspective > Local News > Southwest > Report: Both parties have ‘work cut out for them’ to reach Hispanic vote

Report: Both parties have ‘work cut out for them’ to reach Hispanic vote 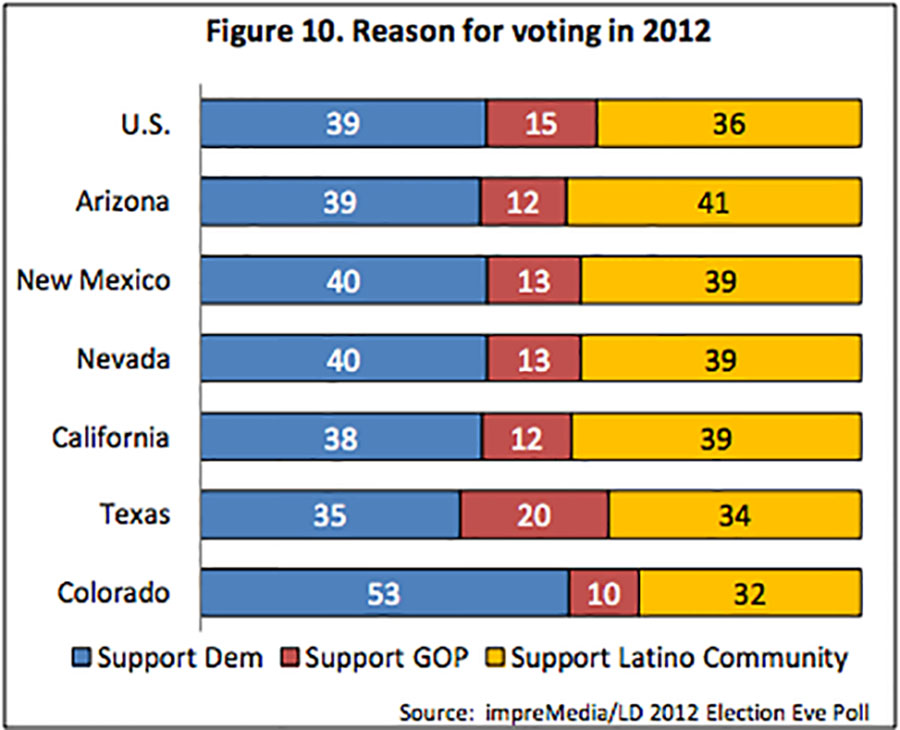 WASHINGTON – Arizona Hispanic voter engagement has not kept pace with the growth of the Latino population, but that is poised to change and political parties need to be ready to take advantage, a new report says.

The report Tuesday from America’s Voice and Latino Decisions said that while the state’s growing Hispanic electorate could help Democrats solidify recent gains, those voters would also be willing to back Republicans, who stand to gain more in Arizona than in other states.

But the report said both parties “have their work cut out for them in terms of Latino outreach” if they hope to capitalize on the trend.

“Ignoring these findings would be a long-term strategy to become extinct,” said Gabriel Sanchez, Latino Decisions‘ director of research, during a conference call Tuesday to release the report.

The survey of 5,600 voters in 11 states, taken on the eve of Election Day 2012, found that 41 percent of those polled in Arizona said they would cast votes they felt supported the Latino community, with 39 percent voting to support Democrats.

Sanchez said Republican rhetoric on immigration reform and laws like SB 1070 made Hispanics apprehensive about the GOP. But the report also said that 38 percent of Latinos in Arizona said they would be willing to vote Republican if the party backed comprehensive immigration reform with a pathway to citizenship – more than in any other state.

Arizona Republican Party spokesman Tim Sifert said the party welcomes everyone and strongly encourages all eligible voters to participate in elections. He notes that Republican candidates include men and women from “every walk of life, every race and creed.”

But he said the effect of changing demographics on state elections, while cited often, is “only part of the story.”

“Political reality reflects the actual choices voters make,” Sifert said in an email. “No two elections are alike, especially considering the effects of redistricting, which appeared to be ignored in this report.”

Arizona Democratic Party spokesman DJ Quinlan said immigration is not the only issue important to Latino voters, but added that Democrats are still better positioned than Republicans to capitalize on the demographic shift.

“We know that immigration reform is not just one issue but a key to several,” including better jobs and better education, Quinlan said. “Republicans will soon find this issue is a disqualifier for them unless something changes.”

He noted that 60 percent of Arizonans under age 18 are non-white and that Democrats will likely continue their success in courting young voters of color.

But Jennifer Cyr, a University of Arizona assistant professor in political science and Latin American studies, said having ideological kinship with Hispanics is only part of the battle – they have to be motivated to vote, as well.

“The state could viably become solidly blue,” Cyr said in an email. “The Democrats’ challenge moving forward, however, is to make sure that the Latino population in the state actually turns out to vote on Election Day.”

She said Republicans cannot be counted out in Arizona, pointing to the large number of Hispanics who are Catholic, for example.

“The Republicans have had a good lock on this state since the ’80s,” Hart said.

While fights over SB 1070 and immigration reform may have hurt Republicans, he believes the party still has a chance to reach out to Latinos. He brushed off the suggestion that Republicans could be in trouble in Arizona.

“To predict that the Republicans could go extinct in Arizona or anywhere else in the near future seems to be stretching it a bit,” Hart said. “The Republicans have been around since the days of Lincoln for a reason.”

Raquel Teran, state director of Mi Familia Vota, said on Tueday’s conference call that she just hopes the report sends the message to lawmakers on the state and federal levels that “the Latino community is too important to ignore.”

Featured Photo: An election eve 2012 poll of Hispanic voters showed those in Arizona among the least likely to vote to support the Republican Party as opposed to the Demcoratic Party or a vote they believed would support the Latino community generally. (Graphic courtesy Latino Decisions)