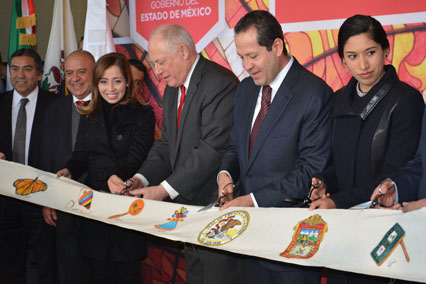 The 150-year-old relationship between Illinois and México was commemorated on Feb. 10 and 11 with the visit of the governor of the state of México Eruviel Ávila. He and Gov. Pat Quinn met in Chicago to continue their friendship.

On Feb. 11, Gov. Quinn and Gov. Ávila laid a wreath at the Benito Juarez Statue at 420 N. Michigan Ave. before traveling to Springfield, Ill., where they attended a theatrical presentation at the Abraham Lincoln Presidential Museum. While there, two actors (Carlo Lorenzo Garcia and Richard “ Fritz” Klein) recreated a scene from January, 1861 between the U.S. and Mexico. The celebration commemorated 150 years of friendship between the two states, and also served to enlighten the public on the events of January, 1861 when the Mexican President Benito Juárez sent a representative, Matías Romero, to Springfield, Ill. The visit marked the first and only gesture of congratulations from a country to President Abraham Lincoln on his presidential win.

Because of this grand gesture and also for their similarities on many political issues such as their opposition to slavery, the Mexican ambassador secured a friendship that proved advantageous for his country. President Lincoln also managed to gain approval of loans to help get Mexico out of debt with Europe and eventually avoid a monarchy, which was being forcefully imposed due to the debt.

To conclude the night, the Symphony Orchestra of the state of Mexico provided a backdrop of traditional music as guests enjoyed an exquisite reception at Gov. Quinn’s mansion. Gov. Quinn expressed his gratitude to his visitors, who he says, “are friends and brothers.” He also remembered another friend, Cesar Chavez, and recalled that in 1974 he told him, “Juntos podemos or ‘Together we can,’ recalled Gov. Quinn. “Viva Mexico!” said Quinn.

Prior to their Springfield trip, on Feb. 10, Gov. Quinn and Gov. Ávila cut an artisan banner, the first ritual in a series to honor the opening of the Casa Estado de México, a new trade office in Chicago’s West Loop. The relationship between…