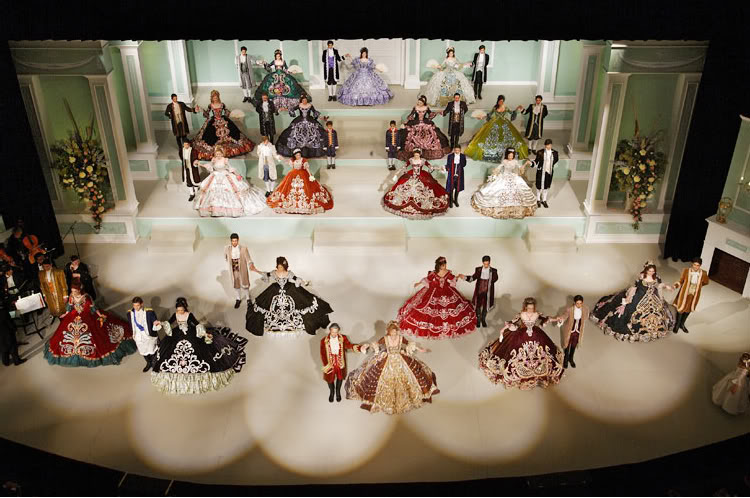 LatinaLista — While most of the nation thinks of February as the month to celebrate love with heart-shaped boxes of chocolate and Valentine cards, for Laredo, Texas, February is all about celebrating — George Washington!

What has turned into a month-long celebration began in 1898 as a way for the town to show their patriotism to the U.S. during the Spanish-American War. However, it wasn’t until 1939 when a local pastor suggested women get involved that the celebration began attracting attention from both sides of the border.

Laredo women got busy forming the Society of Martha Washington. The hallmark of the organization has become a debutante pageant unlike all others.

Thirteen young girls, from Laredo’s oldest families — referred to as ‘Marthas’ — are chosen to make their grand entrance to Laredo high society dressed as if they were attending a ball that Martha herself was hosting.

Now celebrating 75 years, the Martha Washington Pageant and Ball hasn’t changed from that first ball and increasingly garners global attention for its elaborate 100-pound custom-made dresses, the rigid preparation debutantes undergo and its binational element that truly makes this a celebration shared on both sides of the border.

Over the years, countless articles have been written and photos taken of the event but on (what else) February 17, 2014, a documentary entitled Las Marthas will premiere on PBS stations around the country.

Las Marthas unravels the origins of the celebration and explores why a town like Laredo, with such deep Mexican roots, feels such affinity for America’s Founding Father, and how against all odds the Washington’s Birthday Celebration has managed to persevere and even flourish, thanks to the Mexican American girls who continue to wear the gilded burden of tradition.