Latina Lista: News from the Latinx perspective > Culture > History > An unlikely introduction to the Red Paint People of New Mexico

An unlikely introduction to the Red Paint People of New Mexico 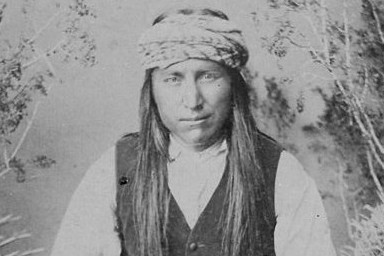 I MET EDDIE MONTOYA WHERE I SEEM TO MEET MOST PEOPLE THESE DAYS: in front of a gas station. This one was in Williamsburg, New Mexico, which is atttached in the most literal sense possible to the substantial town of Truth or Consequences. T or C (no one ever calls it anything else) is about two hours south of Alberquerque on State Hwy. 25. Montoya had dropped by for a cup of coffee with the gas station’s owner, Nick, and wanted to know if I was a real reporter.

I had to think about that for a moment. I decided the answer was yes, as long as Montoya knew that I’m no longer a staff writer, and thus can’t guarentee him much more publicity than any other small-time freelance bum out there. Or, like, here.
“Basically I’m a migrant journalist,” I concluded, wishing that this were not quite so true.

The trunk of my Crown Vic police interceptor comes in handy, because it’s packed to the brim with newspapers. Whenever I need hard copy of one of my stories, I dig through that trunk, throwing newspapers right and left and stopping periodically to read something I wrote a decade ago, mesmerised by my own prose.

The truth is, I’m no less captivated by the sight of my byline under a line lead than I was when I was an intern during the last century. But Mr Montoya had no time to waste, so I popped the trunk and grabbed a few newspapers for him.

Satisfied that I was real enough, Eddie Montoya started talking. He was a man with something to say.

”I’m a Chihenne (Chi-he-nde) Apache – we’re the “Red Paint People“, he told me, as we leaned against my car, gulping coffee. As he said “Red Paint”, Montoya extended a forearm slightly and stroked his skin briefly, as if it were indeed red, or painted red. Perhaps, I thought, it was a memory of red.

The Chihenne are also called the Warm Springs Apache. Like most First People, they reject as myth the migration across the Bering Strait 10,000 years ago, priviliging instead an authority on their own origins that places them here at the beginning of time. 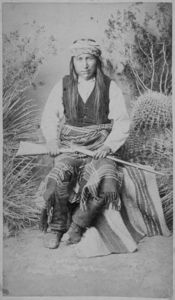 ”Although I’m an Apache, my people weren’t represented by Geronimo – most Apache weren’t. Everyone thinks we’re one huge tribe, all descended from him,” said Montoya. “Well, we’re not. He surrendered; we didn’t. We never signed a treaty, we weren’t allowed any land and we’re not recognized by the BIA (Buruau of Indian Affairs).”

More precisely, according to Montoya, the Chihenne were lumped together as Chiricahua with three other loosely affiliated bands of Apachean language speakers by the US government when Geronimo surrendered in 1886. The Chiricahua had never been a tribe, but they were shipped to Florida as a tribe, then held as prisoners of war in Fort Sill, Oklahoma as a tribe. Finally, they were “released” as a tribe and given the choice of remaining in Oklahoma as the Fort Sill Apaches or moving to the Mescaero Apache Reservation near Ruidoso, NM – as Chiricahua. 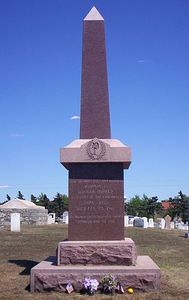 I asked Montoya where the traditional Chihenne lands actually were. Further north or perhaps in New Mexico’s southwestern mountains? Part of what is now Arizona?

“Like, Sierria County?” I’ve never been a quick thinker. The grace of other people has lifted me more than once through this life.

“We’re standing on it,” he said. Gracefully.

A HOT SPRINGS RUNS THROUGH IT

I looked down at the gas station parking lot and jumped, slightly and involuntarily. Suddenly, all the signs saying Hot Springs took on a new meaning. Hot Springs Motel, Hot Springs RV Park, Hot Springs Spa, Hot Springs Retreat, Hot Springs Steak House, Hot Springs Rentals: I’d associated them with tourists, snowbirds, and blue collar retirees. They were in the background. I hadn’t seen a Hot Spring because there are no hot springs you can walk to and look at – they are all owned and fenced and cost money.

“Let them think they can own the springs. We don’t want anything but recognition of who we are,” said the Warm Springs Apache who was standing next to me in the gas station parking lot. We don’t want money and we don’t want land. I HAVE land. And we sure don’t need approval. We want just that respect of recognition – an acknowlegement that the Chihenne are here in our home.”

Mr. Montoya held a carved wooded stick with thin strips of leather wrapped around the top. Small feathers, wire, bits of rock and/or beads, carvings and other symbols covered one upper side of the stick. He wouldn’t explain their meaning to me.

A few blocks from where we stood, a Geronimo Museum displayed big plaster statues of Apache people looking ferocious, and sold Geronimo souvineers.

When Geronimo was a prisoner of war in Fort Sill, they used to let him out to sell souviners of himself, to play himself in Wild West Shows, and, once, to ride in Teddy Roosevelt’s inaugural parade.

“Okay, I’ll tell you the meaning of one of these symbols,” Montoya said suddenly. He pointed to a juxtaposition of lines carved deeply into the wood near the top of his sacred stick.

Claire O’Brien is an award-winning journalist based in New Mexico where she writes of the people, history, places and politics she encounters along the way in her exploration of the Land of Enchantment