After reading an article I wrote recently entitled “The Tejano/Tejana Bucket List”, many readers wonder why they had never heard of the people, places, and events I mentioned. As a result, some have already started their “to do” wish list. Still, others lamented correctly that it won’t be easy for the general public to embrace Spanish Mexican early Texas history since they already have a “Texas history begins with the 1836 Battle of the Alamo” mentality. 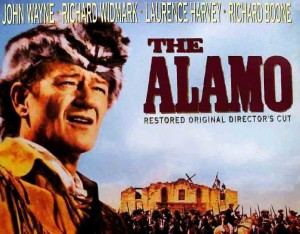 Truth is most U.S. citizens suffer from a severely low Southwest history IQ. Worse, movies such as John Wayne’s The Alamo have perpetuated a distinct anti-Mexican heritage message.

Wayne cared little for historical truthfulness. His main goal was to make a movie during the Cold War reflecting his hatred for communism. Sad to say, Wayne picked the 1836 Battle of the Alamo story, where the Anglo immigrants at the Alamo symbolized the U.S. (good guys), while Mexico characterized the communist Soviet Union (bad guys).

Since shortly after its release in 1960, the film has been greatly discredited. Even J. Frank Dobie, an early advisor, refused to be associated with the movie due to its multitude of inaccuracies. Unfortunately, generations of U.S. citizens use this movie as the source of their knowledge of early Texas history.

Yes, the 1836 Battle of the Alamo did take place as did the battles of Goliad and San Jacinto. However, these battles are a chapter in Mexico’s history, not the U.S. The reason is that Mexico did not lose Texas until 1848. In other words, General Santa Anna had every right to be in San Antonio in 1836 to defend Mexico’s sovereign territory against armed immigrants from the U.S.

Yes, Sam Houston and David Crockett did come to Texas. But, they did not come here to fight for Texas independence. They were just part of the tsunami of typically poor, land-hungry immigrants from the U.S. that were pouring into Texas (Mexico) in a torrential stream, most of whom didn’t have proper immigration papers.

Finally, nowhere else in history has one ethnic group robbed another group of its heritage to embellish their own. The Alamo and La Bahia Presidio must no longer be marketed only because armed Anglo expatriates from the U.S. died there. These iconic structures must be honored for their strength, beauty, and creativity of their Spanish and Mexican (Native American) builders.

The recent unveiling of the Tejano Monument in Austin signals a good start in teaching a more fair, balanced, and seamless account of Texas history.

In the words of Dr. Lino Garcia, Jr, UTPA Professor Emeritus, “Exigimos solamente lo que merecemos.” (We demand only what we deserve.)