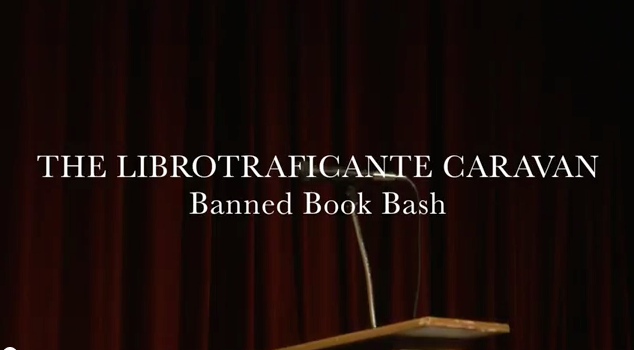 LatinaLista — “When we heard that Tucson Unified School District administrators not only prohibited Mexican American Studies, but then walked into classrooms, and in front of young Latino students, during class time, removed and boxed up books by our most beloved authors – that was too much. This offended us down to our soul. We had to respond.”

The response was in the form of a cross-country tour dubbed the Librotraficante Movement. In spring 2012, a caravan of Latino authors traveled through six cities on their way to smuggle banned books back into Arizona. With over 1,000 books donated by supporters of the movement across the nation, the caravan was able to open four underground libraries along the way.

In addition to opening the libraries, the caravan put on a mini literary festival at each stop, calling it the Librotraficante Banned Book Bash.

In San Antonio at the Guadalupe Cultural Arts Center, the Librotraficante caravan drew added attention to their cause when popular Latina author and San Antonio resident, Sandra Cisneros, took the stage to read and show her support for the students of Arizona.