Young people challenged to live the next 50 days without violence in memory of Dr. Martin Luther King, Jr.

LatinaLista — Today, April 4, marks the 45th anniversary of the assassination of Dr. Martin Luther King, Jr. As in years past, his life and message of nonviolence will be honored, remembered and talked about but, unlike past anniversary observances, it will serve as the premise for a specific challenge to today’s young people — abstain from violence for 50 days. 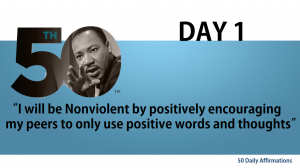 Christened “The 50 Days of Nonviolence,” the campaign asks young people to keep the peace until the end of their school year. Though it’s targeting youth in the Atlanta, Georgia area with special events and concerts for the kick-off, the campaign is meant for youth everywhere.

“We mark the 45th anniversary of the assassination of my father, Martin Luther King, Jr. with a challenge to young people to study, embrace and practice nonviolence,” said Ms.Bernice A. King. “As my father said, ‘The choice is no longer between violence and nonviolence. It is either nonviolence or nonexistence,’ and we believe young people have a leadership role to play in creating a nonviolent society.”

Created by The King Center, the campaign features a blog where affirmations on how to practice non-violence will be posted each day of the campaign. The conversation will continue as well on Twitter @KingCenterATL and with the hashtag: #50DAYSNONVIOLENCE.

With violence overtaking some urban school districts and communities and young people too often the perpetrators and victims of it, the campaign’s organizers know the message of nonviolence may be a hard sell but the outcome, if practiced, would be priceless.

Guatemalan gallery doubles as research center sharing the history of the country's art from la Conquista to the present
Comment
Guest Voz: (Ret.) Ambassador Garza — A Must Do: Immigration Reform