Latina Lista: News from the Latinx perspective > Latino Politics > Over 30 percent of Latino voters don’t feel their votes will have an impact on who’s elected president

LatinaLista — The Pew Hispanic Center released their latest survey regarding how Latino voters are leaning. Not surprisingly, the survey found Latinos favoring Obama over Romney by 3-1 ratio. 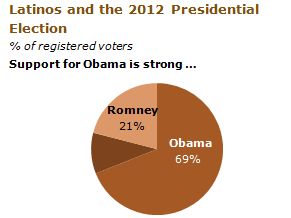 However, the survey went on to say that some of these same Latino voters, who are “satisfied” with their lives and the direction of the country, are also not sure if they’ll bother to show up at the voting polls.

At the same time, however, fully two-thirds (67%) of Latino adults say they believe the Latino vote will have a “major impact” on determining who wins this year’s election.

It’s the last statement above that is most troubling. While the majority of those surveyed believe that the Latino vote can make a difference, over 30 percent don’t.

If 30 percent of the 1,765 Latinos surveyed for this poll don’t believe that voting makes a difference, no telling how high that percentage is among the rest of the population.

Are these Latino voters disillusioned? Angry? So disconnected from the political process that they don’t understand the relationship between civic engagement and leadership/policy change?

It’s clear that these particular voters need a different message. Just telling them to get out and vote is not working, but how do you get a people to care enough to perform one of the most important duties of being a citizen and, at the same time, show them that it does indeed make a difference whether or not their candidate wins?

When someone figures out that message then there won’t be holding back the Latino electorate.