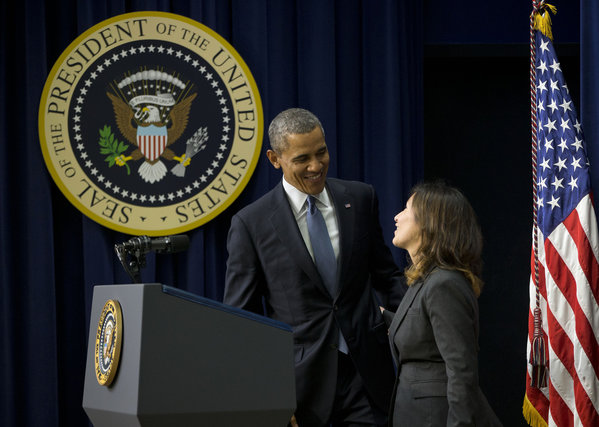 On Cesar Chavez Day, we celebrate one of America’s greatest champions for social justice. Raised into the life of a migrant farm worker, he toiled alongside men, women, and children who performed daily, backbreaking labor for meager pay and in deplorable conditions. They were exposed to dangerous pesticides and denied the most basic protections, including minimum wages, health care, and access to drinking water.

Cesar Chavez devoted his life to correcting these injustices, to reminding us that every job has dignity, every life has value, and everyone — no matter who you are, what you look like, or where you come from — should have the chance to get ahead.

After returning from naval service during World War II, Cesar Chavez fought for freedom in American agricultural fields. Alongside Dolores Huerta, he founded the United Farm Workers, and through decades of tireless organizing, even in the face of intractable opposition, he grew a movement to advance “La Causa” across the country.

In 1966, he led a march that began in Delano, California, with a handful of activists and ended in Sacramento with a crowd 10,000 strong. A grape boycott eventually drew 17 million supporters nationwide, forcing growers to accept some of the first farm worker contracts in history.

A generation of organizers rose to carry that legacy forward.

The values Cesar Chavez lived by guide us still. As we push to fix a broken immigration system, protect the right to unionize, advance social justice for young men of color, and build ladders of opportunity for every American to climb, we recall his resilience through setbacks, his refusal to scale back his dreams. When we organize against income inequality and fight to raise the minimum wage — because no one who works full time should have to live in poverty — we draw strength from his vision and example.

Throughout his lifelong struggle, Cesar Chavez never forgot who he was fighting for.

“What [the growers] don’t know,” he said, “is that it’s not bananas or grapes or lettuce. It’s people.”

Today, let us honor Cesar Chavez and those who marched with him by meeting our obligations to one another.

I encourage Americans to make this a national day of service and education by speaking out, organizing, and participating in service projects to improve lives in their communities. Let us remember that when we lift each other up, when we speak with one voice, we have the power to build a better world.

I call upon all Americans to observe this day with appropriate service, community, and education programs to honor Cesar Chavez’s enduring legacy.

IN WITNESS WHEREOF, I have hereunto set my hand this twenty-eighth day of March, in the year of our Lord two thousand fourteen, and of the Independence of the United States of America the two hundred and thirty-eighth.

Cesar Chavez Day, proclamation, White House
Previous Post Pre-inca tomb discovered in the house where Mario Vargas Llosa was born
Next PostVideo: Remembering that no wave of immigrants had an easy welcome

Pre-inca tomb discovered in the house where Mario Vargas Llosa was born
Comment
Video: Remembering that no wave of immigrants had an easy welcome