Video: Looking at all sides of New York City’s controversial proposal to allow non-citizens to vote in city elections 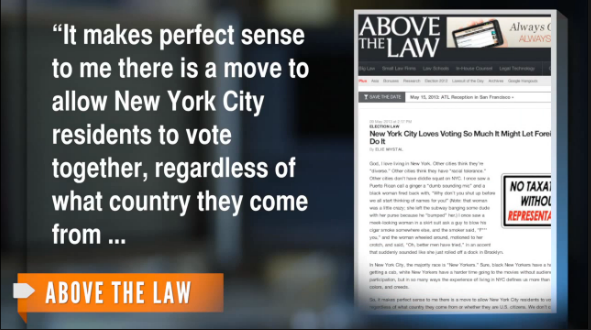 LatinaLista — The debate in Congress over immigration reform promises to heat up before fireworks explode July 4, the time Sen. Schumer predicts the senate will have passed the issue.

Yet another immigration bill promises to be even more explosive and divisive than the national bill if it ever comes to the floor for debate. It’s a proposal by the New York City Council that would grant the city’s non-citizens the right to vote in the city’s local elections.

Needless to say, both sides of the issue have come out swinging. Bringing much needed perspective to the issue are the folks at Newsy.com who cite what several different sources are saying about letting non-citizens vote in city elections and presenting a much more balanced view in the process.