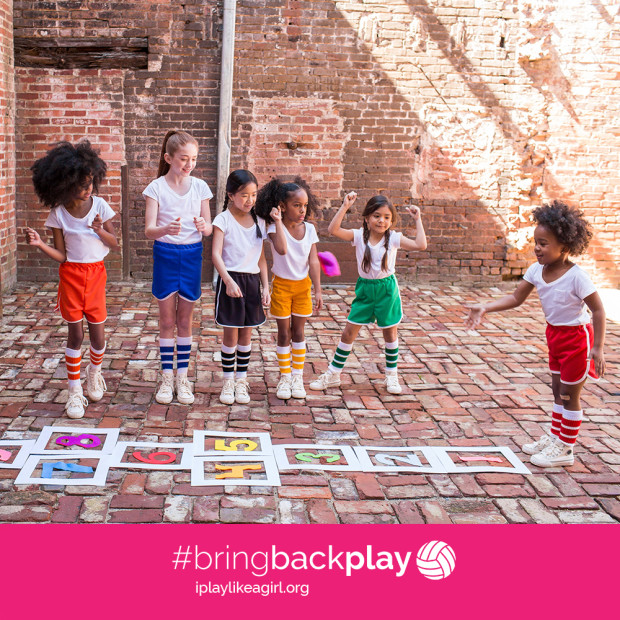 What started in 2004 as a few annual events hosted by sorority girls in Alabama has become the source of inspiration for several thousand girls and young women across the United States and Canada. At Play Like A Girl, the mission is to inspire girls everywhere to live happier and healthier by promoting physical activity as a path to lifelong success.

The idea for the Pop-Up Play Day Tour was sparked when it was realized that girls in the program’s after-school programs seldom ride bikes or play old-fashioned games like hopscotch and Double Dutch. Like so many others, these girls spend more time playing on digital devices than they do playing outdoors.

It was quickly realized that girls aren’t the only ones who have stopped playing. In fact, Nike’s “Designed to Move” report suggests that physical activity in the U.S. has declined 32% since 1968 and is on track for a 46% drop by 2030. Consequently, 1 in 3 American girls (that 12.5 million) are overweight and obese.

This must change. To do their part, Play Like A Girl researched the most successful intervention programs in the world to figure out what  girls are missing. They read a ton of research articles and talked to a lot of girls…

For instance, it was learned that a girl who plays sports also:

Among many other things, they learned that girls need a daily ritual of play: an established pattern of getting outside and playing every day. So they decided to bring back play by delivering early, positive experiences for girls in active play, physical activity and sports.

The Pop-Up Play Day Tour is a powerful yet simple way to help girls get active, enjoy the outdoors and realize their full potential easier than ever thought possible.

The Pop-Up Play Day Tour is an unprecedented collaboration to bring play back to America’s most inactive communities, beginning in the South where the burden of overweight and obesity is greatest. The tour is designed to provide simple steps and tools to help girls and their families get back outdoors to play again.

The schedule on the Pop-Up Play Day Tour is equal parts information and fun. Every effort is made to deliver a healthy dose of education and entertainment that keeps girls excited about and committed to active play, physical activity and sports long after the tour has left their communities.

Girls of all ages are invited to attend these free events, which offer an entire day of activities and games for girls and their families, including sports clinics and drills, cheer, dance, and old-school games, as well as a 5K walk/run, arts and entertainment to encourage active and healthy lifestyles.

The Pop-Up Play Day Tour will stop across the South, kicking off Memorial Day weekend with stops in new cities every 2-3 weeks until Labor Day 2016 (tentative list by state below). Exact location in each state is TBD with nonprofit and educational partners who will help kids warm up for Pop-Up Play Day by hosting pre-event activities and training for teachers, parents and administrators at dozens of schools and recreational centers in tour cities.