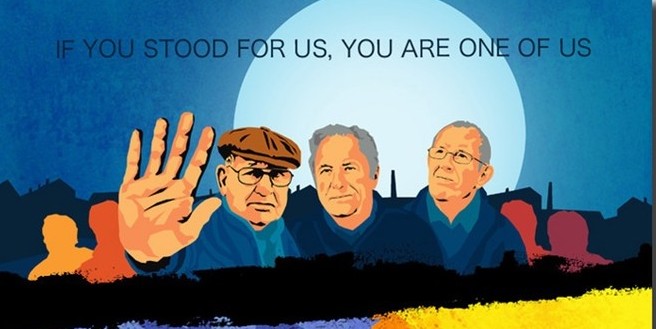 It’s 1974. Bob Fulton, a Scottish Rolls Royce worker, refuses to work on an aircraft engine. He has seen what it has been used for and wants nothing to do with it. He might lose his job, he panics at what his wife will say and he worries about not being able to provide for his two children, but he feels a responsibility.

By the end of the day, the entire factory workforce has joined his stand.

This engine, along with many others they’d helped build and maintain over the years, had powered the jet fighter bombers of the Chilean Air Force during their attack on the 11th September 1973 against the Presidential Palace in Santiago.

The Chilean coup easily toppled the established government led by President Salvador Allende. Within hours of the attack, Allende’s supporters and anyone against the coup were arrested, tortured, summarily executed, chased out of the country or forced to go into hiding.

There was little hope of a quiet life for anyone vocal about Allende’s ideals or for those who preferred their democracies to come about peacefully.

Yet, one of the most efficient actions of solidarity took place in Scotland without a single shot being fired.

In solidarity against the coup, the Scottish workers managed to hold on, against the orders of their management, and pressure from the Chilean Air Force, the British press and Government. They leave the engines to rust in the uncertainties of the Scottish weather.

The workers were told they are back in service in Chile. For decades, they lived with that false ending, growing to believe that their action was meaningless, had no humanitarian impact.

Filmmaker Felipe Bustos Sierra found the last surviving members of the Scottish workers and started looking for those engines and for answers.

The result will be Nae Pasaran, the first feature documentary combining creative storytelling techniques with a journalistic approach to history.