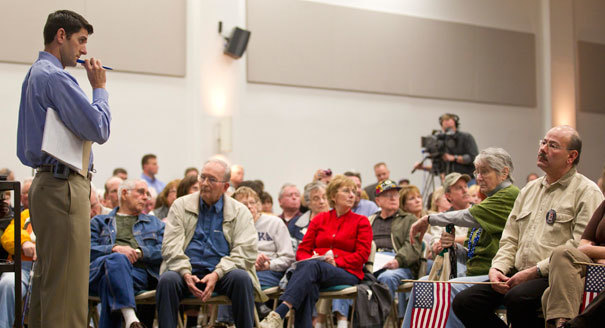 In an era of sharp disagreements between Democrats and Republicans, there is one thing Americans can agree on: They believe that elected officials are not paying enough attention to the general public. This finding comes from a study about how Americans think legislators should and do decide to vote.

“Americans are startlingly unhappy with Congress, and this is importantly because of what they perceive as an off-the-rails decision-making process,” says Jon Krosnick, a professor of communication and of political science at Stanford University.

At a time when approval of Congress is at a historic low, Krosnick’s latest research provides a possible explanation for dissatisfaction: a public disapproval of the influences they see in policy-making.

Conducted in collaboration with the Associated Press-NORC Center for Public Affairs, which published the study, Krosnick and his collaborators from Stanford and the University of California, Santa Barbara, interviewed a nationally representative sample of 1,021 American adults in 2015 and a similar sample in 2017. Despite the change to a unified government under a new president, Americans’ views of congressional decision-making did not change.

The researchers found that there is a perception among the American public that wealthy people, the people and organizations who helped lawmakers win their elections, the people who voted for them, and their own political parties influence them too much.

“When people talk about draining the swamp and corruption, they are really talking about decisions being made based on the wrong criteria. I hope that if legislators choose to be more transparent about their decision-making in the future and do so more as the public wants, the country might say, ‘Washington is not as swampy as I thought,’” says Krosnick.

How to improve public perception

One of the study’s central findings is the importance of transparency in decision-making. Understanding the decision-making process is key to shaping citizens’ perception of the legitimacy of democratic institutions, says Krosnick. He found that when representatives provide appealing explanations about the rationales for their voting choices, public perceptions improve.

To test this claim, national survey respondents read various descriptions of a hypothetical US senator explaining their voting decisions. Statements confirming the senator’s focus on the general public led to more positive appraisals, whereas statements explaining voting decisions by attention to the wishes of economic elites and campaign donors led to lower evaluations of the hypothetical senator.

Krosnick sees these findings as an opportunity to educate elected officials about how they can communicate decisions in a way that connects favorably with members of the public.

“If members of Congress want to improve their standing in the public’s eyes, they can pay close attention to the preferences of their constituents and explain the rationales for their voting decisions to those people,” says Krosnick, noting that the perception of how legislators make decisions is crucial to how much faith people have in government.

“Explaining rationales for voting decisions is evidence of the respect that the public deserves—transparency and accountability will help.”

The Stanford Woods Institute for the Environment funded the work.