Latina Lista: News from the Latinx perspective > Columns & Features > BlogBeat > Why the Shortage of Latino Teachers in Chicago Schools?

Why the Shortage of Latino Teachers in Chicago Schools? 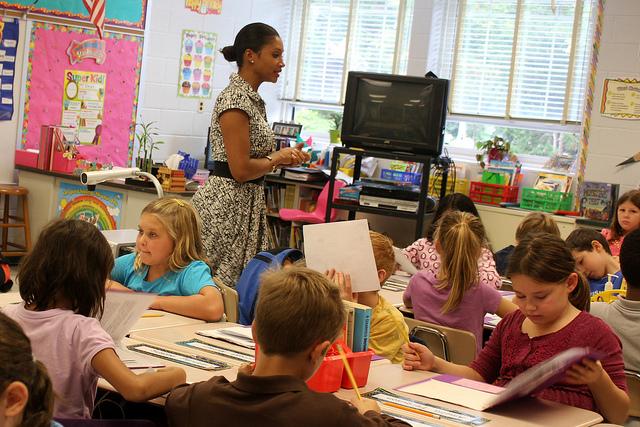 Ray Salazar calls himself a “white rhino.” He’s Latino and a high school English teacher, a description and perspective that’s perhaps as rare as the critically endangered northern rhinoceros, he says on his popular blog.

Salazar teaches in Chicago Public Schools, where the lack of diversity among teachers was recently the focus of a series of stories by WBEZ. In one of the articles, “Why Are Latino Teachers Such a Minority in CPS?” Latino Policy Forum Education Director Cristina Pacione-Zayas, who attended CPS in the late 1990s, said she did not have a single Latino teacher throughout her years in the system.

That may not be true of most CPS students today, as the number of Hispanic teachers has been “crawling upward.” Still, in a district where Hispanic students make up the largest racial or ethnic group at nearly 46 percent, a significantly smaller percentage of the teaching staff — 18.6 percent — is also Hispanic, according to figures on the CPS website.

“One thing is true: Latino teachers are the minority among CPS teachers and their growth is not keeping pace with the rapidly growing Latino student population,” Becky Vevea reports for WBEZ.

At Salazar’s high school in southwest Chicago, almost 100 percent of the students and 15 percent of the teachers are Latino, he said in an email — a statistic he attributes to a “bold” now-retired principal who saw the need to diversify the school’s teaching staff. (She was also the one who hired him.) Before that, there were no Latino teachers at the school, Salazar said.

​In a similarly-themed WBEZ article on black teachers, Natalie Moore writes, “The face of Chicago Public Schools teachers is changing: the teaching workforce is whiter and less experienced. Meanwhile, most of the students in Chicago’s public schools are Hispanic and African American.”

“Students tell me that having a teacher who grew up in similar circumstances makes a difference to them,” Salazar said. But “while cultural awareness and competence play important roles in teacher-student relationships, what plays the definitive role is how good the teacher is….Teachers of color make a difference in communities of color only if they know their content, only if they can teach and engage students, only if they have the social skills to maneuver through class and generational differences, only if they’re focused on student needs and not on themselves.”

As the WBEZ coverage reveals, there are challenges to recruiting qualified teachers of color. One expert, Dominic Belmonte, told the radio station:

“If you are a person of color with a 25 ACT and you’re a high school senior, there are avenues for you that are everywhere that are saying come hither, come join us in law, come join us in business, come join us in finance where the ground will be padded down for you, where you can have internships,” he said. “…and here we are in the teaching corner, saying, ‘Come here where no one believes you’re doing a good job. Come on over here where you are distrusted and belittled and maligned.’”

Salazar mentioned finances as a possible challenge to recruiting black and Latino students into teaching, writing in an email that minority students who come from low-income families may seek a higher-paying profession after college graduation.

“While there is a shortage of Latino teachers, we cannot push Latinos or other minorities into this field to change data,” he said.

There are other challenges, too. For instance, in 2012, the state of Illinois raised the cut score on the teacher certification test, and fewer minority candidates were passing.

There are several organizations out to help — among them, the Golden Apple Scholars Program, which provides financial and mentorship support for students who enroll in one of Illinois’ teacher preparation programs. Grow Your Own is another program WBEZ points out for its focus on educating minority students to teach in low-income schools. Also notable, the Noble Network of Charter Schools has partnered with a graduate school that has started recruit Noble Latino and black alumni.

Chicago, education, featured, teachers
Previous Post Crowdfunder: Bringing fresh air to consumers and a fresh start to world's orphans
Next PostGovernment anthropologists will attempt to speak with the uncontacted tribe, the Mashco Piro

Crowdfunder: Bringing fresh air to consumers and a fresh start to world's orphans
Comment
Government anthropologists will attempt to speak with the uncontacted tribe, the Mashco Piro