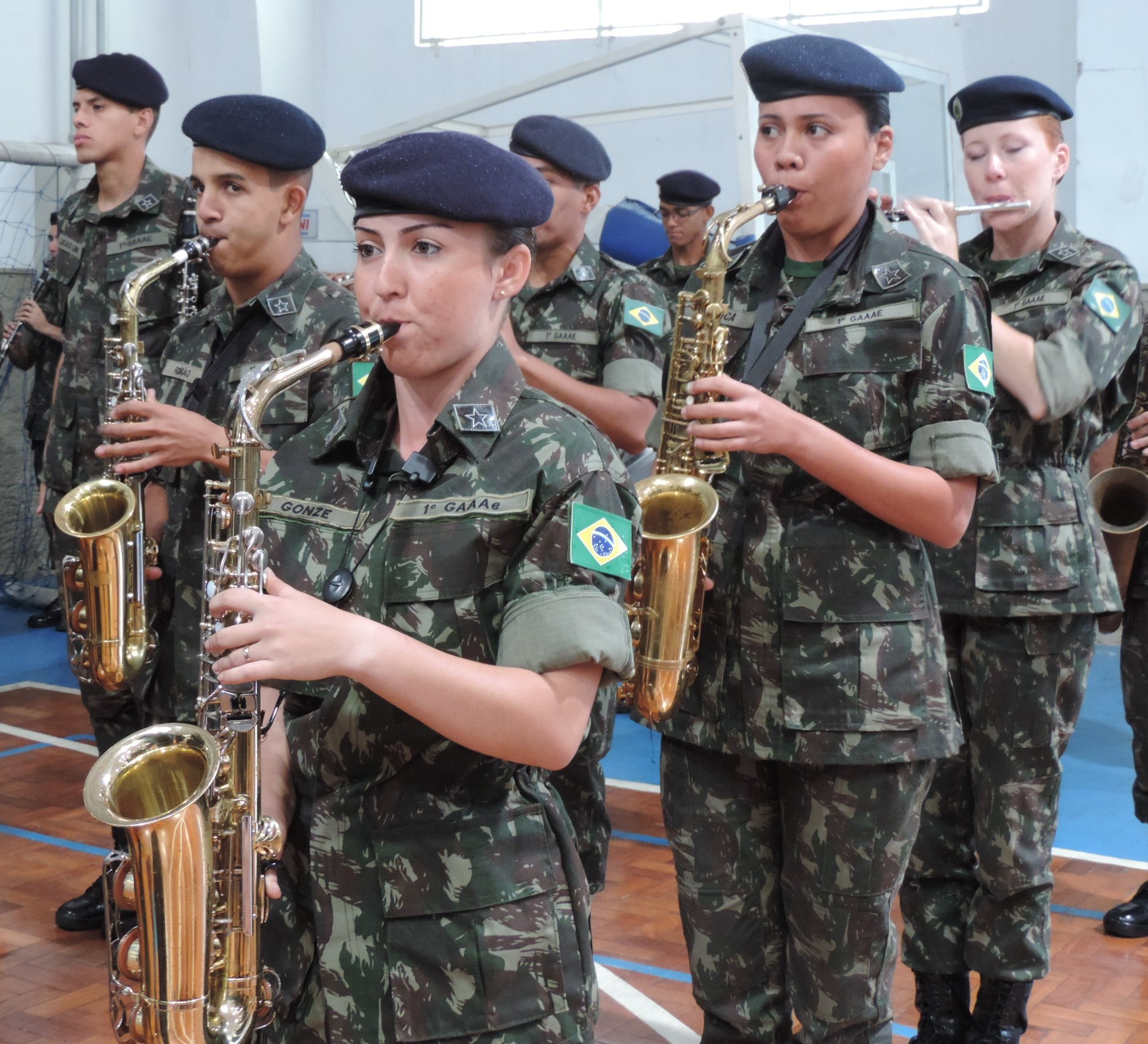 Music and military service are in the blood of Carolyne Gonze, a 22-year-old Minas Gerais native.

The saxophonist is the granddaughter of a conductor and niece of a Musician Sergeant in the Brazilian Army.

Until recently, Gonze had been able to pursue only her musical passions.

But late last year, an opportunity opened up that enabled her to unite her two vocations. For the first time, the Brazilian Army was allowing women to enroll in its competitive exam for Musician Sergeants.

Acceptance into the program is not easy: 1,818 men and 169 women between the ages of 18 and 26 applied for 56 openings. Gonze was one of six women admitted to the School for Musical Sergeants. In April, they began the course at the Deodoro Military Village, in Rio de Janeiro’s West Zone.

“I came in search of personal fulfillment. I achieved my dream of joining the Armed Forces without the need to give up music,” Gonze said. This daughter of civil police officers already is setting an example for her younger brothers, 18-year-old twins who will take the same competitive exam next year.

The Musician Sergeants’ Course is another step in the ongoing process of opening the Brazilian Army to women. Only 5,464 out of the army’s 198,000 soldiers are women, which breaks down to nearly 3%.

The process of recruiting more women has been underway systematically since the early 1990s, when the Army School of Administration (EsAEx) accepted the first 49 women who passed a competitive exam. In 2002, the Medical Sergeants’ Course opened its doors to women. This year’s course included 62 female graduates. They share their barracks with the six future Musician Sergeants.

“Being a part of this class is a major responsibility. We’re opening new paths for women in the Armed Forces,” said flautist Joyce Souza, 26, of Rio de Janeiro.

Souza has classical training, acquired through four years of studying sacred and classical music at the Baptist Theological Seminary of Southern Brazil, in Rio. Now that she has reached her goal, she is setting her sights even higher.

“I want to join the Army’s Symphonic Orchestra, in São Paulo,” she said.

For her part, saxophonist Bianca Christina Cardoso Santos wants to lead an army band. To achieve this goal, she must reach the rank of Lieutenant. Men and women who enter the army through the Sergeants’ School can attain the rank of Captain, which is also a goal for Santos.

“I want to be a conductor, so I know I need to improve as a musician and climb the ranks,” said Santos, 26, who studied at the Mercês Convent School of Music, in São Luís, Maranhão.

The future musician sergeants begin their days with reveille at 6 a.m. During the day, they attend lectures and engage in a demanding exercise regimen. Curfew is at 10 p.m. In their first year of training, with the 1st Anti-Aircraft Artillery Group, the focus is on military training. It is only during the second year of the course, in the Logistics Sergeants’ School, that the dedication to music becomes more prominent.

“The pride that my family is feeling gives me strength to overcome this challenge,” said Stefani de Freitas Dagostim, 23, who plays the euphonium and was a conductor and teacher with the Lauro Müller municipal band in Santa Catarina.

Other doors in the Brazilian Army will open soon for women. Law No. 12.705, passed in August 2012, states that women also may begin receiving combat training starting in 2016.

Signed into law by Brazilian president Dilma Rousseff, the law gives the army up to five years to prepare for the integration of women into the Army Preparatory School (EsPCEx), the officer training school at the Agulhas Negras Military Academy (AMAN) and the School for Combat Sergeants (ESA).

“A study is being carried out on the integration of women into the combat segment. We will have the first class in two years,” said Maj. Renato Libânio, the chief basic training instructor for sergeants in the 1st Anti-Aircraft Artillery Group.

(Featured Photo: Saxophone player Carolyne Gonze, 22, always wanted to be a musician and work in the military. “As a Musician Sergeant, I will combine my two vocations,” she says. [Photo: Flávia Ribeiro])