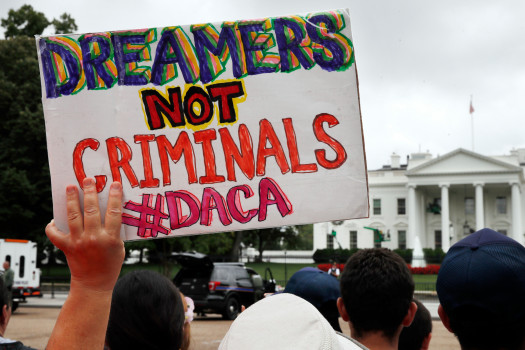 Tuesday, September 5, 2017, is a day that about 800,000 undocumented youth are nervously awaiting. On that day, Trump will decide what to do about a program that has been a literal lifeline, to a normal life, for these young people, who were brought to the US as infants, toddlers or pre-teens by their parents.

The program known as the Deferred Action for Childhood Arrivals (DACA) was passed under the Obama administration in 2012 as a memorandum through the Department of Homeland Security. For the first time, the U.S. government recognized that these children, though not legally U.S. citizens, who grew up, were educated, joined the workforce or military and seamlessly assimilated into US society, were for all practical purposes Americans.

However, since its initial passage, a group of anti-immigrant, ultra-conservatives and mean-spirited members of the GOP have lead the charge to rescind DACA and deport all the youth enrolled in the program. (Editor’s Note: Check out the preceding link by Center for New Community which shows in clear detail who are the people pushing Trump to eliminate DACA.)

It was an issue that candidate Trump learned quickly could ignite his base into raucous roars, something the nation has witnessed feeds this president’s narcissistic ego.

In a show of support, more and more politicians, primarily Democrats, along with activists, community leaders, Latino organizations and faith leaders are petitioning and protesting on behalf of these youth, popularly known as DREAMers.

Yesterday, more than 1,850 leaders sent a letter asking Trump to spare DACA. The letter tried to appeal to Trump’s business sense by pointing out the cost to the economy if it were to lose these workers and consumers.

However, hopes aren’t high that he’ll listen. A similar letter was sent to Trump, though not with as many signers, to not pardon Joe Arpaio. We know how that turned out.

Because DACA was a memorandum, Trump doesn’t need Congress to let him do something his base is salivating over. He could decide to do one of three things: 1. Immediately eliminate the program; 2. Stop approving new applications; or 3. Just allow the remaining 2-year DACA terms to expire.

Regardless of the choice Trump makes, he cannot claim the old GOP rhetorical stand-by of “respecting the rule of law.” His pardon of Arpaio and his many indiscreet remarks regarding the Russian investigation and his involvement in the defense of his son’s meeting with Russian operatives, to name a few examples, underscore the underlying fact that opposition to DACA never was about the rule of law.

It’s all about white, Anglo insecurity and a self-righteousness that lacks compassion, common sense and any foresight to understand just how an act of deporting American-raised immigrant youth will come back to haunt the future of this country.

If DACA is eliminated, the country will not only be seen by our global neighbors as being steered by the prejudice and racism of a few but surrendering our moral compass, that has before now, set us apart from the rest of the world and truly made “America great.”

Marisa Treviño is a journalist and CEO of Treviño TodaMedia, the parent company of ncluido.

Hispanics Now Nearly One-Quarter of U.S. Students, Data Reveal
Comment
What is the online equivalent of a burning cross?