Latina Lista: News from the Latinx perspective > 2016 Presidential Candidates > The message to Latinos is no longer “Get out the vote” but “Get the VOTER out” 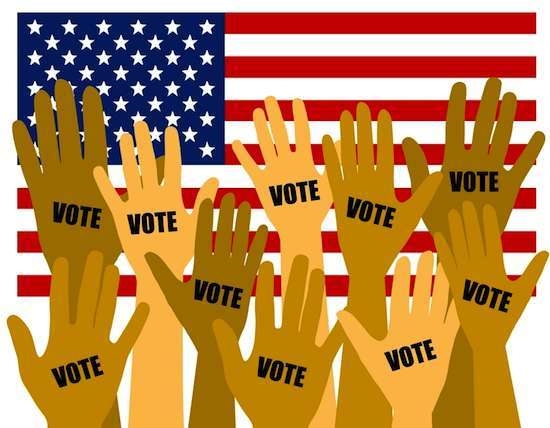 LatinaLista — The headline all but threatens in its declaration of “Record Number of Hispanic Americans Ready to Vote for President.”

Being ready and actually voting are two distinct ends of a problem that have existed ever since pollsters realized Latino wasn’t synonymous with newly-arrived-immigrant.

The turnout rate at the polls by Latinos have historically been shameful, though la gente did kick it up a notch in the 2008 and 2012 presidential elections to give Obama consecutive victories.

But without Obama on the ticket, many Latino organizations, eager to show the mainstream that the threat of a civically engaged Latino electorate is still real — and here — kicked into overdrive, this campaign season, voter registration efforts.

Using incentives from taco trucks to the musical group Maná to an innovative matching donation campaign to the usual non-profit voter registration drives, organized Latino registration efforts have been in full force but with a difference — lower budgets and less interest from traditional donors.

As Arturo Vargas, the executive director of the National Association of Latino Elected and Appointed Officials (NALEO) told NBCLatino’s Suzanne Gamboa, “I think calling (the investment) weak is generous. In my opinion, the donor community has abandoned the Latino electorate in this election cycle.”

Could it be that Latino voter registration donations are so low because traditional donors are tired of waiting for the Latino electorate to fulfill its potential and wake up?

By all accounts, voter registration interest has increased among Latinos.

A couple of weeks ago, Google Trends recorded a “surge” in Latino interest in voter registration. They christened it the “Alicia Machado Effect.”

Is it because, as some have surmised, Latino voters are apathetic?

It’s hard to believe that anyone would think this election isn’t worth the effort to turn out. Never before in the history of U.S. politics has there been someone on the presidential ticket who:

A new Pew report released today does nothing to ease those fears.

To counter that, several organizations, and private individuals, have created the second part of ‘Getting out the Latino vote’ because:

Experimenters have found statistical evidence that, for instance, if you ask people to be voters, you get more voter turnout than if you simply ask people to vote. (Source: The Achievement Habit)

Showing people how to vote and the importance of their vote is instrumental in convincing more Latinos that voting isn’t just their civic right but a duty that’s more imperative than ever before to exercise.

A Texas-based bilingual initiative to combat low Latino voter turnout in the Lone Star State. Your Vote, Tu Futuro was born from a desire to walk potential voters through the voting process. This web-video series will cover the importance of voting, a basic overview of government and party structures, where to find candidate information, Texas’ voter-ID law, and the methods the voter can utilize to ultimately cast their ballot.

The Willie Velásquez: Your Vote Is Your Voice Documentary

A PBS documentary on William C. Velásquez, the founder and president of the Southwest Voter Registration Education Project (SVREP) was screened on PBS stations across the country and is available online.

The hope is that Latino viewers will watch and learn how Latino trailblazers fought and learned how to use the right to vote and made a difference in the process.