Latina Lista: News from the Latinx perspective > Palabra Final > Politics > How come the “nation’s largest living generation” doesn’t have a bigger turnout at the polls?

How come the “nation’s largest living generation” doesn’t have a bigger turnout at the polls? 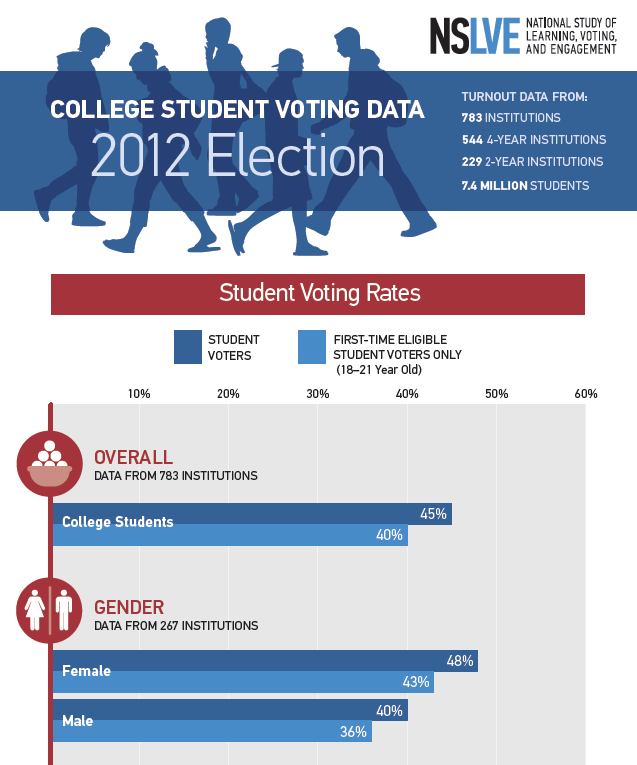 It’s no secret that the vast majority attending Sanders’ rallies have been millennials. His message resonating with this age group has made for a visual odd couple that distracts from the fact that they see themselves as kindred spirits with the octogenarian’s ideology.

Yet, as the NPR headline notices, Sanders should be winning with help from his millennial followers. After all, Pew recently reported that millennials have now surpassed Baby Boomers as the “nation’s largest living generation.”

The millennials flocking to Sanders’ rallies have mostly been college students and older. In other words, they are of voting age, with many first-time voters. So, what’s happening between the rallies and voting day for these millennials?

The National Study of Learning, Voting, and Engagement (NSLVE) from Tufts University released a first-of-its-kind study analyzing the 2012 voting behavior of  certain groups of college students, based on an analysis of the voting records of 7.4 million students at 783 college and university campuses.

They discovered some interesting insights:

While this study is a start, it doesn’t explain WHY young voters aren’t transferring their civic enthusiasm into civic practice. For that reason, the study’s researchers plan to use their data to answer some intriguing questions:

“While college students are voting in higher numbers than young people overall, these data show that there is still significant potential to increase voting and political learning on campuses, particularly with regard to first-time voters,” says Nancy Thomas, Director of the Institute for Democracy & Higher Education at Tufts University, which runs the NSLVE study. “In 2016, universities can and must do more to build the type of campus climates that not only reduce barriers to voting, but increase students’ motivation to participate.”

civic engagement, Millennials, voting
Previous Post Crowdfunder: How one millennial plans to close the gap between public perception and reality about the homeless
Next PostAir pollution during early pregnancy can harm babies

Crowdfunder: How one millennial plans to close the gap between public perception and reality about the homeless
Comment
Air pollution during early pregnancy can harm babies