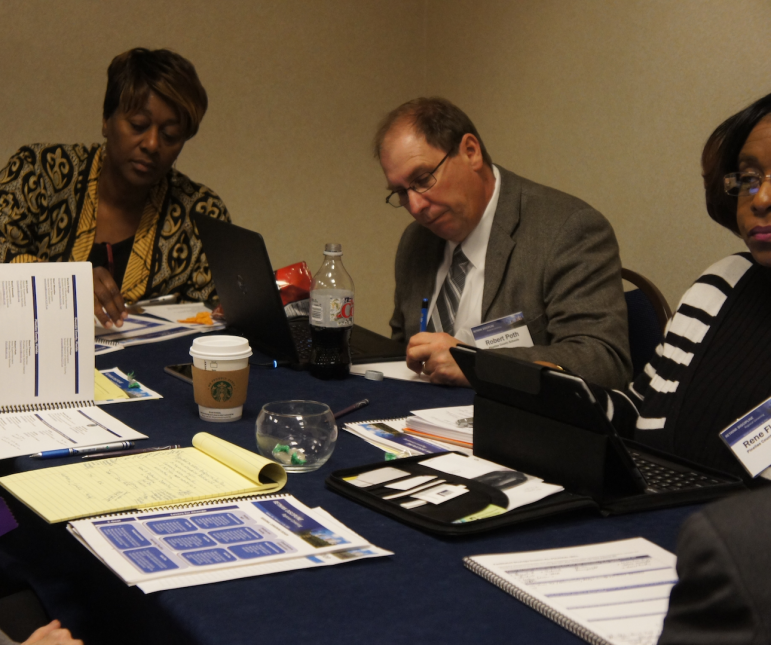 ATLANTA — When communities want to snip the school-to-prison pipeline, how do they do it?

They revise their code of conduct, redefine the role of school police, address bias, build a positive school climate and address problematic behavior in a positive way, among other things.

School officials in the Southeast learned some of these new strategies at the Rethink Discipline Regional Convening in Atlanta last week.

The conference was sponsored by the Safe and Supportive Schools Initiative of the U.S. departments of Education and Justice.

The goal is to reduce suspensions and expulsions — which are used disproportionately with youth of color and create a pipeline into the criminal justice system.

“Everybody is talking about this topic,” said Lisa Thurau, founder of the nonprofit Strategies for Youth, which provides training to improve police-youth interactions. The school-to-prison pipeline is seen as a real and serious problem, she said. “It’s not deniable anymore.”

He is currently working with Fulton County and Atlanta city schools to set up mediation, peer counseling and diversion programs to lower suspension rates and keep kids out of the court system.

School principals from Florence, South Carolina, were at the conference to revise their district’s code of conduct for students.

Some schools have made changes that have worked. The city of Baltimore, for example, undertook a reform that reduced its school suspension rate from 26,324 students in 2004 to 7,550 in 2014, according to data from the Maryland State Department of Education.

When the Baltimore district began looking at its code of conduct, it found that suspension was the final consequence for numerous small offenses, such as dress code violations.The district really had no other tools to use for these offenses, one presenter noted.

A positive approach to discipline

The Safe and Supported Schools Initiative advocates a multitiered approach to school discipline as opposed to one-size-fits-all. Rather than providing a handbook to students and talking about unacceptable behavior, schools focus on positive behaviors, and staff model them.

The conference sent the message that positive school climate can be intentionally created.

With the multitiered approach, schools have several levels of response to problematic behavior, including using different instructional methods and interventions.

The approach takes into account the various supports students may need, both behavioral and academic.

In schools, it’s routine to provide academic supports, but not behavior supports, said Ginny O’Connell, program manager for special education services and supports at the Georgia Department of Education.

Thurau, of Strategies for Youth, said schools should address the role of police. Are police in schools going to be a protective factor or a risk factor, she asked.

In far too many school districts their role is not clear, and policies should be written to clarify it.

“Too many police and school resource officers are used and misused by principals and others in authority,” she said.

Officers are sometimes caught between the principal and the police department, who may disagree on a given situation, she said.

It’s also important to recruit officers who are right for schools.

“You don’t want John Wayne. You want a parental figure who will dig deeper into a kid’s misbehavior rather than slapping on the handcuffs,” Thurau said.

Schools and communities need to rethink the emphasis on punishment, undertake effective alternatives and take care in planning the right relationship between schools, police and courts, she said.

Another issue that schools need to address is implicit bias, said Dan Losen, director of the Center for Civil Rights Remedies at the Civil Rights Project at the University of California at Los Angeles.

He pointed to a recent experiment from Stanford University in which 250 teachers read a narrative of student behavior and were told the behavior was a second offense.

When the student’s name in the narrative was presumed to represent a black student (such as Deshawn) teachers recommended suspension far more often than when the name (such as Greg) was presumed to be a white student.

“If we expect black students to be disruptive and disrespectful and want to correct bad behavior, we look for it more, and we see it more often,” Losen said.

“Black students are aware of the extra scrutiny,” he said.

Lewis Brinson, chief diversity officer of Hillsborough County Public Schools in Tampa, Florida, said some teachers — both black and white — and some schools were addressing and moving beyond bias.

“What we have to do is replicate [those] who are doing it right,” he said. “We need brave leaders to step up and identify those [staff] who are falling short.”

“We need things in place where we can wake up those who are unconsciously mistreating kids,” he said. Then they can “leave their biases in the car.”

San Antonio public transit offers free rides on Election Day
Comment
Researchers create "BFF" campaign to save bananas from extinction, which may be closer than we realize