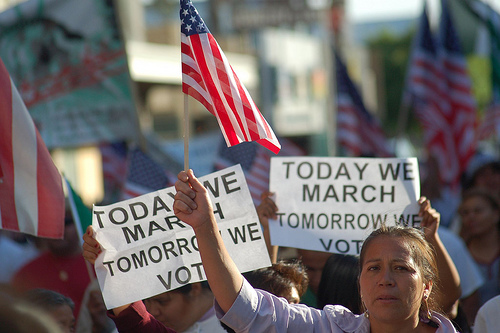 Hispanics are the largest ethnic minority group in the United States, and their concerns will have a major impact on the 2016 presidential election.

Stanford University historian Albert Camarill speaks here about their influence, especially in some key battleground states that are home to an increasing number of Hispanic voters.

Q  How might Hispanic voters influence the 2016 election?
A This is a benchmark year for the Hispanic voting population. Between 2012 and 2016, you have 3.2 million more eligible US-born Hispanic voters. Add to that another 1.2 million people who’ve become citizens since the last general election. If you start doing the math, 3,000 more Hispanics are eligible to vote every day.

It’s a young population: 800,000-plus of native-born eligible voters every year in the last four years, in addition to the new immigrants that are naturalizing. It’s unprecedented: more than 27 million eligible Hispanic voters. An estimated 13, maybe 14 million, will cast a vote, depending on their motivation. That’s why people are saying that the Latino vote, especially in the critical battleground states where Hispanic voters constitute substantial voting blocks, will make a huge difference.

If you look at the most critical states people are talking about now, they would not have been on the map 20 years ago. Colorado, Arizona—no one would’ve thought that Arizona would be a state in play, but the demographics of the state and its eligible voters have shifted. Hispanics have contributed significantly to that. Florida—another hugely important battleground state.

If you look at the national polls that have sampled the Hispanic origin population by national origin group and Hispanics overall, three things have defined their interest: education—a no-brainer; jobs for what’s basically a working-class and aspiring middle-class population; and immigration. Those are the defining issues for 2016.

Though 10 years ago immigration may have been the third most important issue, today the presidential campaign has elevated that to probably number one, with jobs and education close behind. There’s such a concern in the Hispanic population—especially the Mexican origin population—about immigration.

There’s great fear about what’s going to happen to relatives, friends, and neighbors if there’s a policy to apprehend and deport those who are undocumented.

Q Do the concerns and rhetoric on immigration reflect what is really happening?
A There’s a great irony in the 2016 national election. If you were to ask 9 out of 10 Americans, “What is one of the most critical issues?” they’re going to say, “It’s immigration. It’s out of control. Our borders are being overrun.”

Yet there’s an enormous gap between perception and reality. In past decades there were record numbers of immigrants, both legal and undocumented, coming to the US, especially from Mexico, but from Central America as well. In the last three to four years, any demographer that works on immigration will tell you that, for the most part, immigration from south of the US border has come to an end. The unbroken chain of immigration from Mexico, predominantly, is over.

So, if net immigration is zero, how did that happen? There are basically three factors. Beginning with the Clinton administration, the US enacted immigration reform legislation and reinforced the border. In fact, there is a wall. It stretches from San Diego at the Pacific Ocean into Arizona and parts of Texas. The border has also become increasingly militarized, which makes it even harder to get into the country and increasingly expensive to have a smuggler bring you across. Today, it costs $20,000 to $30,000 per person to hire a smuggler, with no guarantee that you’ll make it to the US.

Historically, the chief reason people have come by the millions from Mexico to the US, especially over the last 40 years, is the availability of jobs, coupled with a weak Mexican economy. But the great recession and the elimination of so many jobs in the US led to the return migration of hundreds of thousands of Latino immigrants. Even as the economy resuscitated, the number of people trying to re-enter the US has dropped dramatically.

Post-recession, the US economy has begun to develop jobs again. But the Mexican economy, at the same time, has created more jobs for that demographic that used to seek the US as a safety valve.

Q Why has immigration become such a controversial political issue now, especially given our history as a melting pot?
A We talk about America as an immigrant society—it has been forever, really. But there’s also been an anti-immigrant thread in the American past, beginning with the first immigration law in 1792 that said you must be of the white race to be a naturalized citizen.

Race played an important part. Through the 19th century there were restrictions on the Chinese, and Asians in general, on becoming naturalized citizens. Hispanics never had that racial exclusion; they could always be naturalized citizens and American citizens. But if you look at the anti-immigrant thread, going back 100 years ago during the Progressive Era, the groups were different. They were southern and eastern Europeans.

Over time though, this shifted, because the nature of immigration shifted to North America—to Mexico, primarily—and to Asia. The discourse today is really about undocumented immigrants, and the largest subset of undocumented immigrants to the US is Hispanic and mostly of Mexican origin. The question is, how real is this anti-immigrant sentiment? I think there’s a reality to it in metropolitan regions and other places that had never had huge populations of immigrants.

The critical issue is what do you do with 11 or 12 million undocumented immigrants in the US? What do we do especially with the children of these immigrants who are native born? Do you separate families? That becomes a big issue within what’s a family-oriented population to begin with. I think that’s a driving force for Hispanic consideration of the immigration issue.

Can we create a way for these people either to become naturalized or to have regularized status in the US?

Guest Voz: Six ways mainstream media contributes to segregating our communities
Comment
Become a Role Model and Business Leader By Getting Your MBA