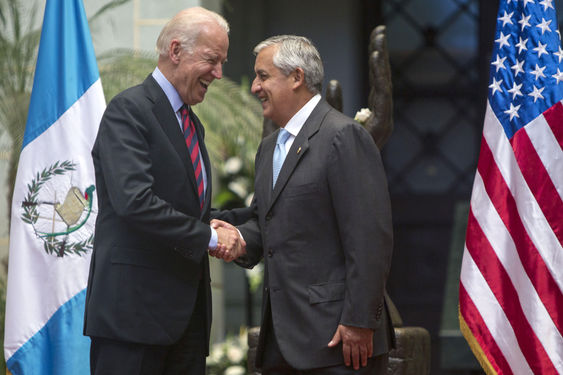 GUATEMALA CITY — Vice-president Joe Biden visited Guatemala today to discuss what President Obama has described as the “humanitarian crisis” of tens of thousands of unaccompanied Central American child migrants illegally crossing the border between Mexico and the United States.

According to the Department of Homeland Security, 46,188 child migrants were detained in the U.S. between October 2013 and May 2014 – an increase of 21 percent compared with the whole of the previous year. Of these, 11,479 were Guatemalan.

Experts say the children flee their home countries to escape poverty, violence, gangs, search for better opportunities or reunite with family members who are already living in the U.S.

Border officials have been struggling to accommodate the flow of new detainees who arrive largely from Central America.

Earlier this week, Guatemalan President Otto Pérez Molina said there were more than 1,500 unaccompanied Guatemalan child migrants temporarily living in army bunkers in Texas and Arizona. The conditions are said to be overcrowded and unsanitary.

“We think that Customs and Border Protection is handling the situation atrociously. Physical abuse, threats, unsanitary conditions, refusal to give children food and water for days on end violate these children’s human rights as well as the Constitution and laws of the United States,” said Sanderson.

Biden called for an emergency meeting with the presidents of Guatemala, Otto Perez Molina, of El Salvador, Salvador Sanchez Ceren, and the General Coordinator of the Government of Honduras, Jorge Ramón Hernández Alcerro.

After meeting this morning with Guatemala’s president, Biden and Perez Molina issued a joint statement where it was reported that Biden spoke in strong tones directed at Perez Molina and faulted the economic and security problems in Guatemala for the flow of children into the United States.

“But, I want to make clear Mr. President,” Vice President Biden said. “The United States recognizes that a key part of the solution to this problem is to address the root causes of this immigration in the first place. Especially poverty, insecurity and the lack of the rule of law, so the people can stay and thrive in their own communities, so a parent doesn’t feel so desperate that they put their child in the hands of a criminal network and say take him, and take her to the United States.”

Guatemala’s Perez Molina responded in part that immigration reform and creating temporary work programs were two ways his country saw a solution to the crisis.

On a call with reporters today outlining the U.S. government’s response to the surge in unaccompanied children, Ricardo Zuñiga, senior director for Western Hemisphere Affairs in the National Security Council, revealed specific foreign assistance to be made in some of the countries.

The U.S. government is going to be providing $9.6 million in support for El Salvador, Guatemala and Honduras to invest in their repatriation centers so that as people are being removed they have someplace they can orderly land and then be processed back home.

In Guatemala, we’re launching a new $40 million U.S. Agency for International Development program to improve citizen security in the areas that are most affected by violence. In El Salvador, we’re launching a $25 million crime prevention USAID program to establish 77 youth centers, youth outreach centers, in addition to the 30 that we already have in place.

Regardless of the show of unity among the heads of states, some are more than skeptical anything will change.

“Flying Biden down to Latin America to talk with governments down there will do nothing because it is quite clear that some of these governments are the problem – they participate in and perpetuate some of the violence – and they are unable to effectively address the escalating violence that is pushing all of these children to leave,” said Sanderson.

Central American ambassadors and diplomats met with officials from the Department of Homeland Security last week to discuss tailoring Public Service Announcements that address the dangers unaccompanied children face on the journey north. The announcements are also expected to educate those considering illegal immigration who may have misunderstood aspects of U.S. law and the applicable benefits they would be afforded once they arrive in the United States.

Today's Crowdfunding Campaign: Training co-operative coffee farmers in Chiapas to start their own roastery
Comment
Film Review: DOCUMENTED is an emotional journey that puts a face and feelings to the immigration issue