Guest Voz: Heroes is spelled Heroes in Spanish, too 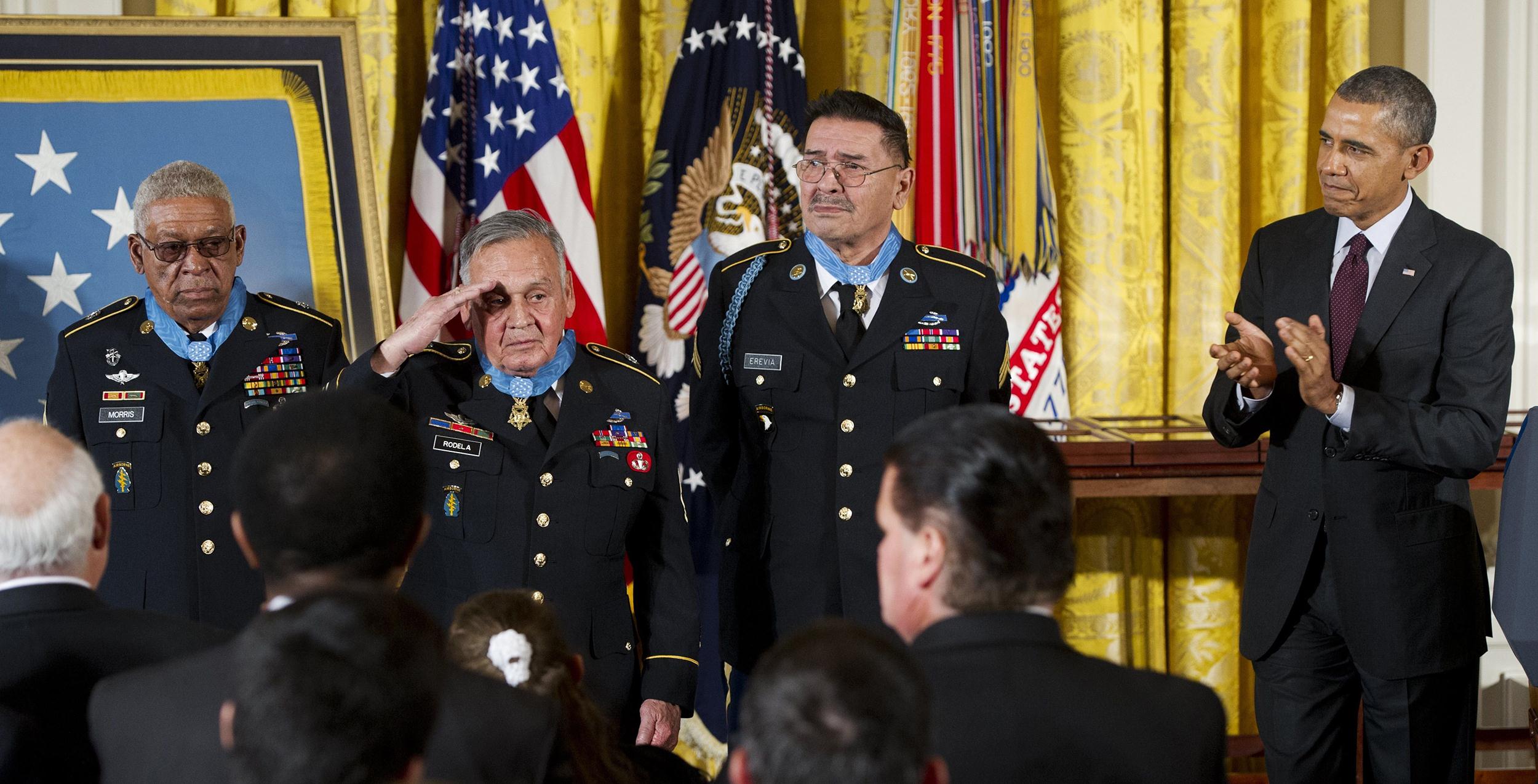 President Barack Obama awarded 23 Medals of Honor yesterday in the White House to WWII, Korea and Vietnam War Army U.S fighting men who were victims of army bigotry. When their own officers submitted them for the highest American medals for combat bravery,they were all turned down for racial or religious reasons by high-ranking U.S. Army officers.

Nonetheless, they were awarded Distinguished Service Cross medals for bravery at the time, instead of percolating up the awards chain of command for the ultimate Medal of Honor. One was Black and five more were apparently Jewish.

The astonishing news flash is that 17 of these 23 men were Hispanics, almost all Mexican American, some, Puerto Rican. Two of the 17 were present for the ceremony. The remaining 15 were awarded their medals posthumously, received by living relatives.

Of the 17, there were seven WWII soldiers, eight Korean War soldiers and nine soldiers from Vietnam, America’s first real “integrated war,” and a war rife with racial incidents, as manifested by these long-ago earned awards.

The awards and this ceremony came about because Congressman Robert Wexler (D-FL), convinced the Congress of the United States to pass the 2002 National Defense Authorization Act that included a provision authorizing an audit of 6,505 of Distinguished Service Cross awardees who were Black, Jewish or Hispanic who might have been turned down for Medals of Honor for racial or religious bigotry reasons by the army chain of command.

Earlier audits had been done to discover Native American or Asian American heroes who might have been denied the proper medals for valor because of race. From those audits, came a Medal of Honor for WWII Japanese American hero, the late U.S. Senator Daniel Inoye.

Of the 6,505 cases reviewed, 24 were selected for upgrading.

The awards were a long time in coming. Some waited 70 years, others 60 years and for nine veterans the awards came 40 years late. Interestingly, they were all United States Army fighting men. No U.S. Marines.

With these seventeen newly awarded Medals of Honor, the total of Hispanic soldiers (one sailor) and Marines who have been awarded the Medal of Honor has risen to 61, including at least one undocumented immigrant from Mexico, Alfredo Rascon. In fact, a total of four were born in Mexico; at least three were born in Puerto Rico.

The first two Hispanics to be awarded America’s ultimate military decoration, the Medal of Honor, were awarded during the Civil War (1861-1865); they were both born overseas, one in Chile and one in Spain.

The next Hispanic awardee was Californian U.S. Marine France Silva for bravery in China during the Boxer Rebellion (1900), formerly known as of the Chinese Relief Expedition.

The next was a young man from Laredo, Texas, David Barkley Cantu. The WWI soldier did not tell fellow soldiers or the Army that he had a Mexican mother due to extreme Army bigotry towards Mexicans after the 10th Cavalry was humiliated by Mexican Army Regulars during its 1916 Punitive Expedition into Mexico (the famous unsuccessful chase of Mexican revolutionary/bandit Pancho Villa). He was awarded the medal for intelligence activities behind German lines; he died returning from the mission.

Hispanic numbers increased dramatically during WWII when over 12 million men and women served during the war, including hundreds of thousands of Hispanics. Ethnic classification, other than Japanese Americans and Black Americans, were not kept because Hispanics were classified as whites.

In these wars and all those going back to our war for independence, Hispanics have served with great distinction starting in 1779 when 200 Mexican, Cuban, Puerto Rican and Spanish militiamen defeated a British force 6 times its size at what is now St. Louis (MO).

There are but three words for these long-neglected heroes honored today in the White House: OORAH! THANK YOU!