Guest Voz: In the political cycle the “young grow old” and forgetfulness sets in

Rank and file Democrats are desperate for a turnaround of their political fortunes, and an end of the Robber Baron era — so much so that they see the recent elections as their deliverance.

For them, the last presidential election was a sign that the country is turning to the left, and that Democrats will be able to keep the presidency for eternity. They believe that obstructionism of Republicans will be drowned by the growing numbers of youth, minority, homosexual and Latino voters. 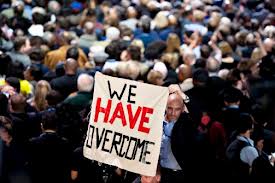 Their hope is that the changes will put them on the road to a more communitarian and humane society.

Pundit after pundit predicts that the entrance of large numbers of gay and Latino voters will end the culture wars that divide the country. There is only one problem — progressives forget that the “Young Grow Old.”

It is easy to get caught up in the euphoria of the moment.

I remember demonstrations in the 1960s, and thinking that we had entered a new era. I did not fully appreciate the seductive power of capital in negating any communitarian or humane transformation. I also underestimated the ability of the ruling class to twist the words of sociologists, and blame the victim with phrases such as the “culture of poverty.”

Nor did I take into account the self-interest of many of the demonstrators who opposed the war; they remained interested for only as long as they were personally threatened. Poverty and injustice was only visible for as long as the young remained young. They became invisible once more as the baby boomers grew old, and took on mortgages. They then distanced themselves from poverty, which again became a non-priority.

Before we enter the World of Oz once more, we should remember that age will not make us wiser; it will not make us more humane. Our system of governing has been taken captive by billionaires who have always been old and count on the young growing old. They count on the individual and the community being disconnected. They have purposely disconnected the family unit from the community, and destroyed any sense of shared history.

In this environment poverty and injustice become invisible.

We are blinded by temporary victories and the glitter of that huge flag pin dangling from our lapels.

Tax breaks for the rich are softened by senior citizens discounts. Daily we play the game of bargains. Every day, my family receives more advertisements from Macy’s than it does from St. Jude’s.

The tactics differ; St. Jude tries to jar us with photos of pelones, bald children who have gone through chemotherapy. Macy’s plays more to our self-interest, and like society seduces us.

The cost of being taken (exploited) becomes invisible. Penney’s recently started a marketing strategy where it posted the true price. No coupons. However, it was such a disaster that the new CEO came under attack and was fired. The truth be told, we have reached the point where young and old want to be taken.

As Latinos and gays get older and discrimination is hidden by the coupon game they will forget that at one time Latinos did not have green cards, and gays could not marry. None of us are immune to seduction. We just turn the other way. Latinos and blacks today tolerate reactionary voices among them, although it is obvious that these voices conflict with their interests.

As in the movie “Soylent Green,” (1973) we’ll take the green wafer which is advertised to contain “high-energy plankton.” Foods that we remember will fade from memory as we grow old.

Coming off my high horse, it does not have to be like this.

Our minds can stay young, and we should remember that at one time most people could afford a home. I bought my first home at 21 – no down payment, total cost $8500. I could qualify for it on my janitor’s salary. Today that same house costs $500,000; $100,000 down. And I am sure I could not qualify for it on a teacher’s salary.

You do not get coupons to buy a home unless they plan to take it away.

The Left is complicit in the aging of our memory. Their journals and their activities include little material to politically educate and integrate Latinos. The Nation rarely includes articles on Latinos west of Chicago. Tellingly, most turned the other way as Mexican American history, books and culture were banned in Arizona.

Recently there was an exchange between so-called socialists; a Mexican American member (a true activist) criticized the body for its white chauvinism. He criticized the members’ lack of knowledge of Latino history. A pedant answered the criticism with a long-winded response naming many African-American members of the Communist Party.

What was revealing was that the respondent named only Latin Americans living south of the United States as communist. It was as if Mexican Americans or Latinos in this country did not exist.

If progressives really want a communitarian society they will support Mexican American and other Latino issues. They will integrate these causes into the progressive agenda, work to achieve them instead of just handing out coupons. A sign of respect for the masses is remembering their names even when they are not considered part of the vanguard.