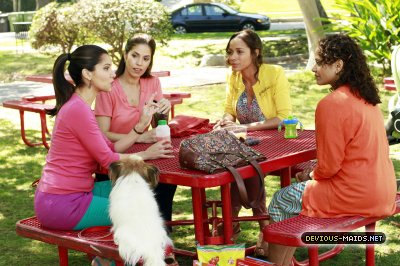 LatinaLista — When the ABC television dramedy, Desperate Housewives,(DH) debuted it was an instant hit. It was so popular among Spanish-speakers that South American countries couldn’t get enough of it, with Argentina, Ecuador and Brazil airing their own versions. Even US-based Univision created their own too.

Now, the creator of the original series, Marc Cherry, has created a show, along with his former Desperate Housewife star, Eva Longoria, that mimics DH and the complex relationship of girlfriends. This time, it’s working class girlfriends, and Latina maids at that.

The series follows five housekeepers after the murder of their friend Flora at the home of her employers. The dead maid’s friends — series stars Judy Reyes, Roselyn Sanchez, Dania Ramirez and Edy Ganem — turn to one another for support, and in DH style, try to uncover who killed their friend. Another housekeeper, played by Ana Ortiz, joins in the series and is rumored to have a connection to the dead Flora.

While it’s admirable that Lifetime picked up the series and that the major characters are all Latina, one can’t help but wonder if this isn’t playing into typecasting for Latina actresses — even if it’s to the bank. (In other words, making money!) In an interview last year, executive producer Eva Longoria answers the criticisms of having a show about Latina maids.

Desperate Housewives, featured, housekeepers, Latina
Previous Post Guest Voz: In the political cycle the "young grow old" and forgetfulness sets in
Next PostGallup poll finds Venezuelans torn between loyalty for Chavez and reality of the state of the country

Guest Voz: In the political cycle the "young grow old" and forgetfulness sets in
Comment
Gallup poll finds Venezuelans torn between loyalty for Chavez and reality of the state of the country