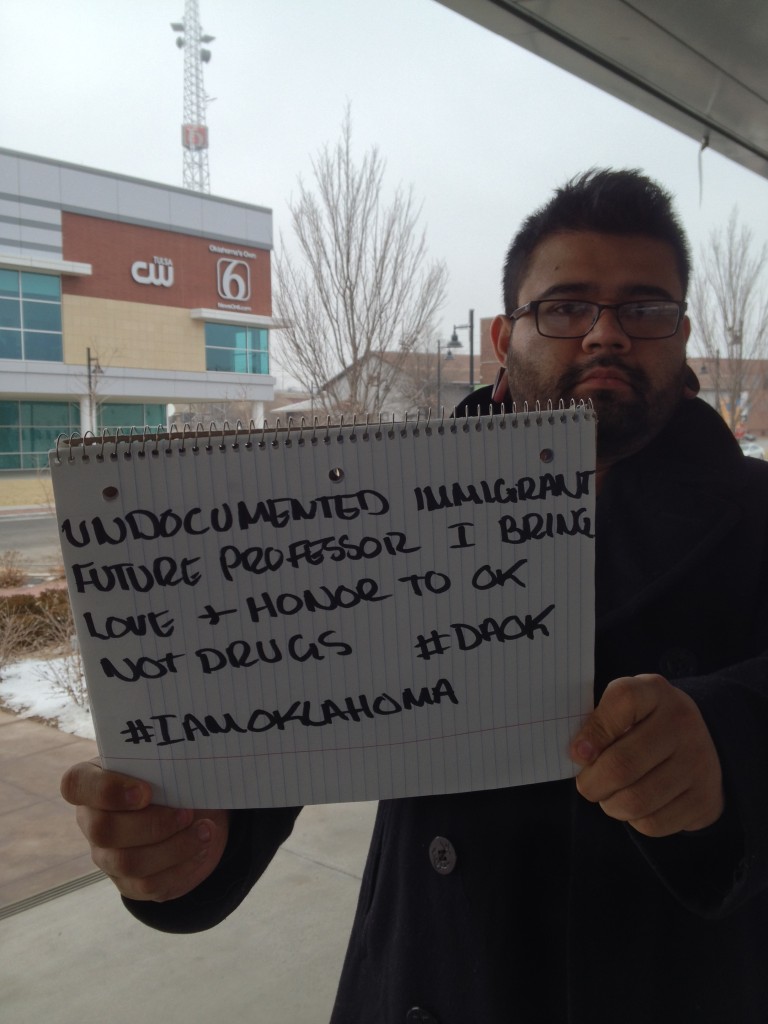 On February 3, 2014, two CBS stations and affiliates in Oklahoma – News on 6 in Tulsa and News on 9 in Oklahoma City – aired a story connecting the increase of the undocumented population in the state, with the local activity of Mexican drug cartels. No specific numbers, no formal studies.

Despite the numerous studies and carefully detailed statistical reports outlining the positive effects of immigration, the report was a bowl of misinformation and inaccuracies.

In these times, it is critical that the general public is informed about the facts. Research shows that immigrants significantly benefit the economy in Oklahoma by creating new jobs, and complementing the skills of the U.S. native workforce, with a net positive impact on wage rates overall.

Oklahoma’s undocumented immigrant population of 75,000 is making extraordinary and tangible contributions to the state and the Midwest.

The long-standing presence and contributions of the undocumented to the economic development and cultural diversity of Latinos and the immigrant population in the state showcase a tremendous growth in the last decade. They are writing Oklahoma’s future by planting strong historical roots.

Nationally, Latinos, largely of Mexican descent, comprise the largest and fastest growing ethnic minority in the U.S. After English, Spanish is the most widely spoken language; in fact, the United States is the fourth largest Spanish-speaking nation in the world.

In many respects, Oklahoma reflects these national trends.

Spanish is Oklahoma’s second most commonly spoken language. Latinos have surpassed both Native Americans and African Americans as the largest minority in the state.

People of Mexican heritage comprise the largest minority, but Hispanics in Oklahoma trace their roots to all 19 Spanish-speaking Latin American nations and Puerto Rico.

As a matter of fact, and according to a special study conducted by the Pew Research Center in 2011, titled Demographic Profile of Hispanics in Oklahoma, Latinos now account for 9 percent of Oklahoma’s 3.8 million – ranking 24th in the U.S.

These figures are remarkable, not only because Oklahoma’s Hispanic population has nearly doubled in the last 10 years, from 179,000 to more than 347,000, but because state legislators passed one of the country’s strictest immigration law: Oklahoma Taxpayer and Citizen Protection Act.

Passed in November 2007, the law includes provisions that go beyond the controversial measures approved in Arizona with the SB 1070. The so-called HB 1804 of Oklahoma drove tens of thousands of undocumented immigrants out of the state, although an exact number is difficult to calculate. However, the Hispanic population grew 85 percent in the last decade, and accounted for about half the state’s overall growth. The rest of Oklahoma’s population just grew about 9 percent since 2000.

America has always been a nation of immigrants. Oklahoma is an example of the so called melting pot. Throughout the state’s history, immigrants from around the globe have kept the workforce vibrant, the businesses on the cutting edge, and helped to build a great economic engine.

Also, immigrants have had an extraordinary impact in the arts and academic fields.

The problem is that America’s immigration system is broken and has not kept pace with the changing times.´

The Community Speaks Up

The strong reaction to the insensitive and inaccurate reporting done by these Oklahoma news outlets could have been avoided had they been the professionals in their craft they would have us believe. As such, their shoddy “reporting” has forced the state’s Latino community leaders to speak out to set the record straight.

“The state may be seeing an increase in undocumented and/or the Hispanic community; however, a majority are actually small business owners, students, parents, religious leaders, and children. There is no mention of positive representation of this in Oklahoma.”

According to Mana Tahaie, director of racial justice at the YWCA Tulsa, “The story made some inaccurate and deeply harmful generalizations about the undocumented in Oklahoma, especially Mexican immigrants. I found a few things remarkable: First that the initial claim — that Oklahoma is seeing the highest increase in undocumented immigration — was unsubstantiated.

“In fact, the Pew study the reporter that cited referenced 2010 numbers, and does not indicate any growth over the past several years. Second, that the piece made it seem that all narco trafficking in Oklahoma comes from south of the border — especially when we know that our state’s largest drug problem is prescription narcotics, followed by meth.

“Third, the story painted a one-dimensional picture of Mexico as a dangerous wasteland ruled by drug cartels, which at best perpetuates a false stereotype and at worst leaves out the substantial role the U.S. “War on Drugs” has played in border violence. And finally, it framed the tens of thousands of Latinos, especially undocumented Mexicans, as criminals.

“The same Pew study demonstrates that while the undocumented represent just 2% of Oklahoma’s population, they are 3% of the labor force — directly challenging the idea that they are all trafficking drugs from Mexico.

“The piece was very divisive, pushing Latinos and their allies further to one side and anti-immigrants to the other extreme, and pitting them against each other. It doesn’t build understanding, or create a dialogue. Instead, it instilled fear of invasion and attack. It stirs up the existing resentment among many native-born Oklahomans, who, because of poor reporting like this, are misinformed on the issues and therefore scapegoat newcomers.

“What’s most unfortunate about the piece is that due to the segregated nature of our communities, stories like this are often the only way that any Oklahomans learn about their neighbors — and the incomplete and inaccurate picture this paints only leads to further division rather than genuine understanding.”

Lily Gonzalez D’Ross, President of Café con Leche Republicans – Oklahoma Chapter, Political Action Committee, concurred. “We are appalled and dismayed by the nearly complete lack of fact checking and lack of objectivity. Certainly, as with any large group, there is a small criminal element among the unauthorized immigrant community, but statistically we are less likely to find an immigrant in prison than a native born American. In fact, incarceration rates for Hispanics in Oklahoma are quite low. The Oklahoma Department of Corrections reports 7.3 percent of new inmates in 2013 are Hispanic, while the U.S. Census reports 9.3 percent of Oklahoma residents are Hispanic. These statistics are even more remarkable when we consider that the demographic group most likely found in prison are young adults.

“We call on Channel 6 and Channel 9 to apologize for the news story that is thoroughly insulting to many Hispanics, and take appropriate action to ensure future news stories about immigration are objective and grounded in facts, not pandering to hysteria about immigration.”

31.9% of immigrants in the state are eligible to vote. 3.3% of registered voters are naturalized U.S. Citizens.

Immigrants are 7.2% of the state´s workforce. 3% of the workforce is undocumented.

The buying power of Oklahoma´s Latinos is $7.2 billion.

Oklahoma has almost 9,000 international students who contribute $174.6 million to the economy.

Oklahoma would lose $580 million in economic activity if undocumented immigrants were removed.