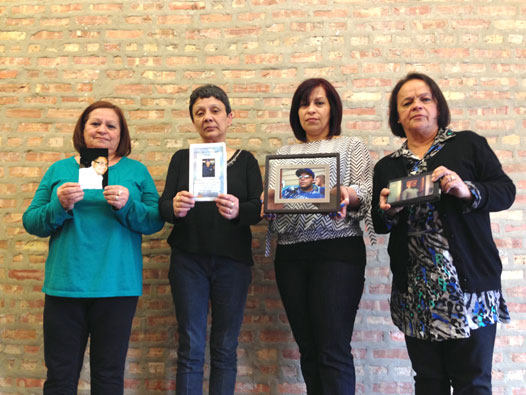 (LL Editor’s note: This article was published before Mother’s Day.)

Not all mothers will celebrate Mother’s Day this weekend. Some mothers, like Gena Hernandez, Dorothy Rosario, Elizabeth Ramirez and Maria Torres, mourn the loss of their sons who died to unsolved crimes in Chicago.

They are all part of the group “Parents for Peace and Justice” formed by Torres’s daughter, Julia Garcia, and Ramirez, who lost her son to a violent shooting.

The never-ending pain that these moms go through doesn’t stop them from fighting for a change to help break the silence of violence that is hitting the streets of Chicago. They want justice not only for themselves as victims, but for other moms as well.

“It’s hard. Mothers are going through this. We can’t keep quiet. We have to unite. Our kids are dying every day for no reason. Somebody has to do something. Support one another. Come out in groups, march,” said Hernandez, whose son Leno was shot multiple times in his car on May 4, 2012.

The case is still unsolved. Leno was raising two young boys as a single dad. “His heart stopped beating on Mother’s Day two years ago. I didn’t want him dying on that day. I don’t have a Mother’s Day. Mother’s Day is gone,” said Hernandez with eyes tearing up.

Hernandez’s pain is felt by Rosario, who lost her son 13 years ago. Her son Michael was 25 years old and was driving his truck when he was followed by another car and was killed in the shooting. He left an unborn daughter who is 13-years-old now and a wife.

“The police took into custody the person who did it, but they had to let him go claiming there wasn’t enough evidence. I tried the first few years to find evidence, but it was discouraging. The police weren’t helpful. They said they had a lot of homicides to solve in Chicago and didn’t have a witness. Without that, we couldn’t do anything,” added Rosario. “My heart reaches out to the ones who have lost their children. I know exactly what that feels like,” she said.

In addition to the pain, these moms also share…