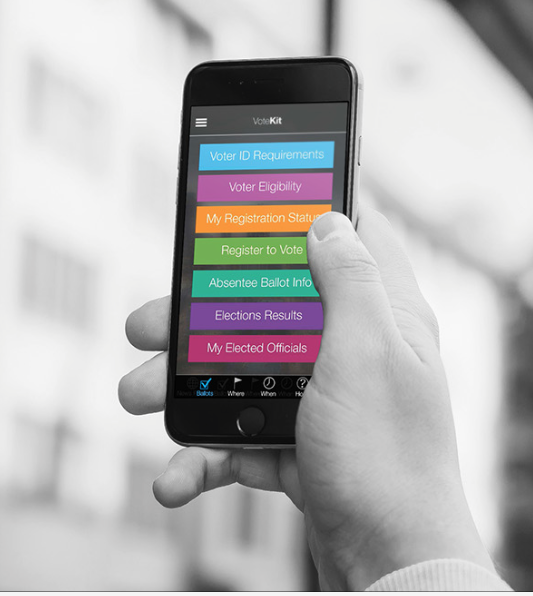 Texas is the state with the lowest voter turnout in the United States, but a mobile application aims to change this picture.

On Thursday afternoon, the ThinkVoting and OCI Group companies launched The Voting App, a bilingual mobile application that collects information about the upcoming elections and presents the data in an organized manner.

“There is a mobile application for virtually everything,” said Joseph Santori, cofounder of ThinkVoting. “And finally there is an application that provides detailed information about all elections”.

The application allows users to compare candidates, learn about the bills on the electoral ballot, reminds them on election day to get out and vote and displays an interactive map with polling locations.

“The mobile application brings together all the information and puts it in the palm of your hand, in a device that more than 90 percent of American adults use” added Santori.

According to Jeff Cárdenas, co-founder of ThinkVoting, the idea is that different groups work together to connect democracy to the 21st century.

“We have all this technology at our fingertips, it empowers us to become better citizens and take control of democracy in the country,” said Cardenas.

Meanwhile, Phyllis Ingram, president of League of Women Voters in San Antonio, said that she and her organization are working with ThinkVoting to encourage more voters to vote, especially for the municipal election scheduled on May 9.

“Voting in municipal elections is one of the most important things a person can do,” said Ingram. “The people we elect to serve in city government impact our lives much more than the president.”

During the last municipal election less than eight percent of residents registered to vote participated.

Ingram said the City Council is in charge of street maintenance, managing the city budget, and hiring police officers and firefighters.

“This impacts our daily lives and therefore it is important that more than 8 percent of the public vote,” said Ingram.
Early elections begin on Monday April 27 and end on Tuesday, May 5th. The official election day is Saturday May 9th.

Bexar County Judge Nelson Wolff was also present during the launch and expressed support for the app.

“It is a very important innovation and an opportunity to change these dismal numbers,” said Wolff.

“We hope that voters pay attention to this app, use it, and cast informed votes.”

San Antonio is the first city where the application has been officially launched and according to Analco Gonzales, associate director of the OIC Group, will soon be in other cities, states and eventually nationwide.

“The city of San Antonio will serve as a model for the rest of the country,” Gonzales said.

The app is free and available for download for the Apple and Android phones.