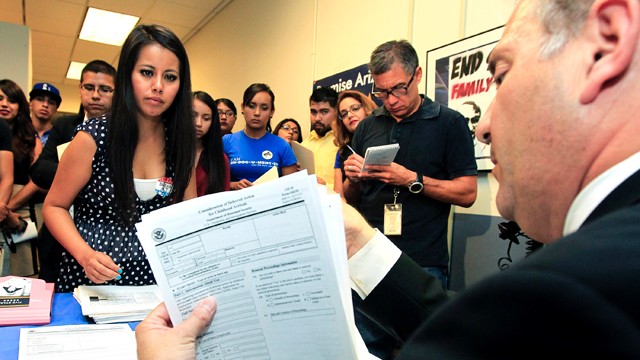 A woman stands before a crowd of fellow North Carolinians, prepared to deliver a speech on a topic of great importance to her.

Carolina Siliceo Perez told how, as a college student, she stood in line to register for classes after the other students, paid out-of-state tuition without having access to financial aid and feared being pulled over every time she drove a car. She experienced these things because she is an illegal immigrant.

The scene was “Moral Monday,” an event in Asheville, North Carolina, sponsored by the NAACP to address topics of social reform. Siliceo came to share reasons why she believes the U.S. needs immigration reform.

“I experienced discrimination firsthand and, in a Rosa Parks-like scenario, was thrown to the back of the list for registering for classes although I was paying three times more to attend community college out of my own pocket,” Siliceo said at the event, which took place Aug. 4, 2014. “I remember hardly scraping up enough money for $800 monthly tuition payments.”

Siliceo, now 22, was born into a prominent family in Mexico City and moved to the U.S. with her mother when she was 2. Her mother brought her to this country to live what she calls a “riches-to-rags story.”

“We were part of this society that I no longer felt a part of, and a society that would’ve expected me to have proper etiquette,” she said.

After her divorce, Siliceo’s mother hoped her family would have a better life in the country where her brothers were already making better lives for themselves. That decision led Siliceo to grow up in America, which meant splitting her time between North Carolina and Florida so that her family could continue to do farm work throughout the year. After working hard in high school, she decided to go to college.

After graduating in spring 2014 with her bachelor’s degree in English from Brevard College in Brevard, North Carolina, Siliceo said she has taken time to distance herself from the stress and agitation of putting herself through college.

“Every year that passes, it seems farther from my memories,” Siliceo said. “It’s kind of difficult to explain to you how I felt because I’m over that. I hurt when I had to hurt.