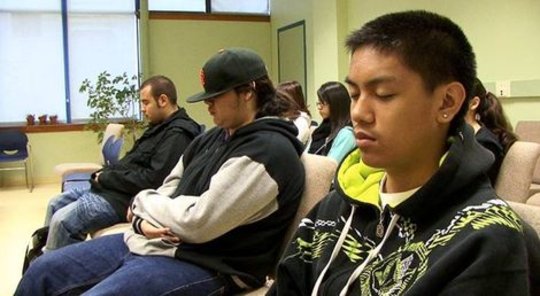 NEW YORK — On a sunny school day last year, the last thing 20 teenagers seemed interested in was a yoga class. Most hadn’t even bothered changing out of their jeans, leather jackets and baseball caps. Despite appearances, one in particular was different.

John was a senior at Humanities Preparatory Academy, a small alternative public high school for students deemed at-risk, yet with the academic potential to attend college. He’s been assigned to the yoga class for the past three years.

“I thought it would just be a class of breathing, just calming the body down, that’s it,” said John, 18.

At-risk youth are those under 18 who are likely to drop out of school for a variety of reasons: substance abuse problems, a troubled home life or getting into trouble with the law. Trauma, poverty and violence often factor in as well.

Programs for at-risk youth have gained in popularity throughout the years as yoga has become more popular. Another contributing factor is that serious yoga practitioners and instructors are taught that they have a duty to give back to, or serve, underserved communities. In 2009 the Yoga Service Council was founded as an umbrella organization for nationwide service programs. At last count there were at least 125 service group members, potentially reaching thousands of people.

The nonprofit Lineage Project, based in New York, was among the founding member groups of the council. Its mission is to use yoga and meditation to help keep at-risk youth, ranging from 10-22, out of prison. In addition to Humanities Prep, it also teaches yoga at juvenile detention centers and in alternative-to-incarceration programs.

Studies on mindfulness meditation have been conducted on various communities since the 1980s. This 2011 study examined the awareness-based practices (self-awareness, self-knowledge and compassion) used by Lineage Project. Conducted at an alternative high school in the city, it found that after a 14-week period, the majority of the 75 participants reduced their stress and anger levels.

Beth Navon, the executive director of Lineage Project, said the Humanities Prep principal asked her group in 2010 to teach there, and they now offer 12 classes a week. In fact, Lineage Project recently developed a new, in-depth curriculum since it’s the only place they teach the same group of students for an extended period.

After getting the students to take off their shoes and quiet down, the school’s lead yoga teacher, Bart van Melik, had them sit in a circle while he explained the day’s theme: compassion. He then went around the circle.

But this approach resonated with the four students who were interviewed for this, including John. He practices meditation more than yoga outside of class, and has noticed a change in himself since he first started.

“You know when people count back from 10 to calm everything down?” he asked. “That’s like me for breathing. It’s almost like I’m slowing down time in a way.”

Van Melik has been teaching yoga and meditation at the school for about three years. He said classes typically follow the same structure: 20 minutes each of first discussing the theme, then movement relating to that theme, followed by meditation.

“There’s a difference between teaching adults who are interested in doing yoga and teaching at-risk youth,” he said. He explained that Lineage teachers need to first create an environment where students feel safe and comfortable.

All the classes through Lineage Project are taught from a trauma-informed perspective, and all its volunteers are required to partake in trauma training.

David Emerson has studied the impact yoga has on trauma patients for the past 11 years. Emerson is the director of yoga services at the Trauma Center in Brookline, Mass. He also founded the nonprofit Black Lotus Yoga Project for people suffering from post-traumatic stress disorder and co-wrote the book “Overcoming Trauma Through Yoga.”

His specialization is complex trauma in women. From 2009-11, under a grant from the National Institutes of Health, he conducted a three-year study on yoga’s effect on women suffering from chronic, complex trauma as a result of childhood abuse and neglect.

Last year Emerson conducted a 10-week study and found that 32 percent of participants reduced their PTSD symptoms. “There had to be a 30 percent reduction for it to be considered clinical,” he said. “That’s as good as it gets.”

In addition to working with women, Emerson has also been teaching yoga to veterans since 2002. Back then he couldn’t find other groups also teaching yoga to PTSD sufferers. Now there are many.

“Yoga is like the Wild West,” he cautioned. “Anyone can put up a sign saying ‘yoga for trauma’ or ‘yoga for vets.’ But there’s no board to certify what you mean.”

He now focuses more on teenagers suffering from trauma, including at-risk teens. So far Emerson has seen the same type of improvement as in the other groups he’s worked with, but needs to do more studies. He hopes to get more funding in the future to conduct brain scans.

Emerson’s approach to trauma-informed yoga is purely movement-based, although it’s part of a larger program that includes therapy and medication. “A lot of people in trauma therapy learn to say what people want them to say,” he said, which is why he believes that talk therapy alone isn’t effective. “For us, we don’t do anything theoretical or cognitive.”

But he added that everyone who participates in his model of yoga also meets with a therapist. “Trauma-sensitive yoga is about noticing what you’re experiencing. Therapy is about integrating that and processing it.” He clarified, “Trauma is not a behavioral issue. It’s about what you feel in your body right now.”

This is in contrast to the findings of the director of the University of Cincinnati’s School of Criminal Justice.

Latessa has studied what works in both reducing recidivism in inmates and preventing at-risk teens from ending up in prison for the past 35 years.

The experience of van Melik, the Lineage Project teacher, differs. He has witnessed how the mindfulness aspect has effectively defused heated confrontations in juvenile detention centers. “It allows kids to see the thought process behind their behavior and to see how to calm themselves down,” he said.

This is a technique that John, the Humanities Prep student, also uses.

“I’ve been more mindful since taking yoga — more mindful to myself and my surroundings,” said John. “I’m very calm in class, but at home … I wish I had Bart, my yoga teacher, at my house. Then I would be at peace 24/7.”