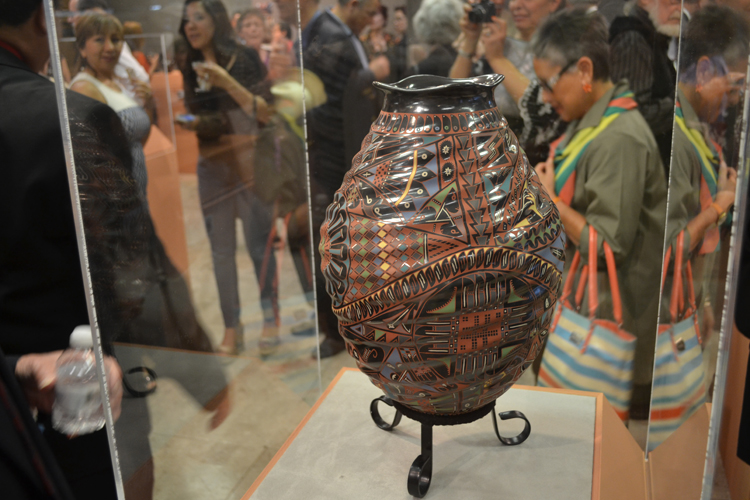 EL PASO — Searching all over the northern parts of Mexico in 1976 for the origin of some pottery he found at a secondhand store in Deming, NM, Spencer MacCallum came to a town just about three blocks long, on the verge of extinction.

The anthropologist found Juan Quezada, the artisan who made the pots, there in Mata Ortiz, Chihuahua, and together they would help not only revive the town, but the art form as well.

El Paso got a taste of what has been called the miracle of Mata Ortiz when the Consulate General of Mexico here honored MacCallum with the Ohtli Award on May 5 in recognition of his role in helping gain international recognition for the Mata Ortiz artisans and their work. The reception marked the opening of an exhibit of Mata Ortiz pottery at the consulate at 910 E. San Antonio Ave.

Consul General of Mexico Jacob Prado-Gonzalez, left, reads a few words on why Spencer MacCallumthe is being honored with Mexico’s Ohtli Award May 5 for his role in helping gain international recognition for Mata Ortiz artisans.

“The Miracle of Mata Ortiz has been something special, enormous, grand. Making the world more beautiful,” MacCallum said. “It would not have been possible without the help of hundreds of people, whom to me are like family.”

MacCallum, who is 84 and now lives in Mata Ortiz, was on hand to receive recognition from the government of Mexico for his work with Quezada and the people of Mata Ortiz, but he spent most of his time giving credit to the man who he said made it all possible.

“This whole miracle of Mata Ortiz began because of the spirit and inspiration of one person – Juan Quezada,” MacCallum said.

While working in the areas surrounding Mata Ortiz, Quezada, born on May 6, 1940, came across and collected prehistoric pots from the Mimbres and Casas Grandes cultures. These artifacts had once been prominent in the area, but had practically disappeared by the year 1400.

With little knowledge of its history and only amateur experience in the art of ceramics, Quezada began experimenting with clay, looking for a way to duplicate his discoveries.

He took into account every detail when it came to recreating the pots. From the ingredients to making the clay, to experimenting with different minerals to get the colors just right and even using human hair for the brushes used to paint the pots.

The time and care Quezada put into this process and still does when creating new pots is what, according to MacCallum, made him and his work unique.

“Juan was not necessarily the first person to attempt making jewelry and figures with clay,” MacCallum said. “But the others just worked to make something they could sell, something practical. Juan made things for the pure joy of making something of excellence.”

Not only did Quezada make artifacts of high quality, he was also able to completely and almost perfectly replicate what the prehistoric artisans of the area were creating more than 600 years before him.

Archaeologist Beth Bagwell, who has explored the areas around Mata Ortiz, found Quezada’s work so authentic that she said she believed it to be of an original. She is one of the many archaeologists who…

PadreCare: Keeping the mind alert an important exercise for seniors
Comment
Crowdfunder: Ensuring the oldest democratic school in the U.S. lives on