Latina Lista: News from the Latinx perspective > Culture > Indigenous Peoples From Around The World Go Digital During Proud To Be Indigenous Week 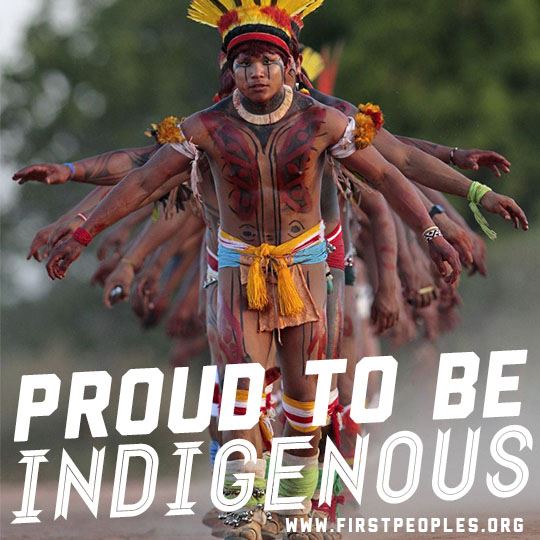 Proud to Be Indigenous, hosted by First Peoples Worldwide, is a multi-dimensional social media campaign to highlight and celebrate indigenous cultures around the world. The movement culminated in Proud to Be Indigenous Week, which coincided with the 12th Session of the United Nations Permanent Forum on Indigenous Issues (UNPFII) held in New York City.

“Around 2,000 indigenous peoples registered to attend the UN Permanent Forum this year, which is twice as many as last year,” said Dan Morrison, Director of Communications at First Peoples. “That’s amazing, but the problem is, there are 370 million indigenous people in the world. So we started thinking, how do we allow more indigenous peoples to participate, to have their voices heard, to share and celebrate their culture and heritage with each other?”

Taking to the internet, First Peoples and the Proud to Be Indigenous coalition partners, which numbered over 50 Indigenous and Indigenous-friendly groups, asked people to show off their indigenous heritage, traditions, and pride, and the response was overwhelming – Proud To Be Indigenous received over 300 photos representing 69 Indigenous Peoples across 33 countries.

Responding to daily themes such as land, language, art, food, and knowledge, people sent in photos, videos, documents, music tracks, and news stories. The hashtags #Proud2BIndigenous and #P2BI were used a total of 5,620 times throughout the campaign and half a million people were reached through Proud To Be Indigenous’ Twitter activity alone.

How did this happen?

A coalition of over 50 indigenous and indigenous-friendly organizations including Cultural Survival, the Smithsonian National Museum of the American Indian, Amazon Watch, Indian Country Today Media Network and dozens of Indigenous communities helped spread the excitement about Proud to Be Indigenous to their community members, friends, and supporters (see full list below).

“By utilizing social media, Proud to Be Indigenous has made UNPFII a much more inclusive space,” says Agnes Portalewska, Communications Manager at Cultural Survival. “We are honored to be part of #P2BI and humbled by the outpouring of support from Indigenous people around the globe! Being united in struggles, there is hope for change and the implementation of Indigenous rights!”

Along with the online campaign, First Peoples hosted several side-events in New York City for UN Permanent Forum participants and visitors, including a donor breakfast, which allowed grantees and organization leaders to meet and network with potential donors, a workshop led by First Peoples founder Rebecca Adamson on how corporations need to engage and work with Indigenous Peoples to create win-win solutions, a consultation for Indigenous People to provide feedback on the U.N. Global Compact’s Draft Guide for Business on Indigenous Peoples’ Rights, and a first-of-it’s-kind culturally-appropriate leadership training for Indigenous Peoples.

Proud to Be Indigenous Week is over but First Peoples and the Proud To Be Indigenous coalition will continue to share content throughout the year so continue submitting your photos, music, and knowledge to proud2bindigenous@firstpeoples.org or share it on Facebook and Twitter using the #P2BI hashtag! And Proud To Be Indigenous is already planning for next year, so send in your ideas of how it can be improved to include more people and have a greater impact.