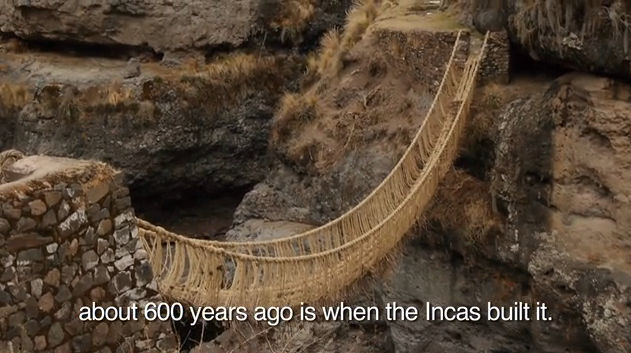 LatinaLista — We’ve all seen in Indiana Jones-type movies those rope bridges at the mercy of the wind, connecting two sides of sheer cliff faces, seemingly dangling thousands of feet high above a dangerous crevice or raging river. The bridge is a sure-fire element to create suspense in any movie.

The assumption is that the bridge is thousands of years old, made by the indigenous ancestors of the current tribes who fiercely guard their territories. Yet, a new film is about to shatter those assumptions.

While it’s true that indigenous people are responsible for these feats of engineering magic, it’s not true that they’re no longer around. In Peru, Victoriano Arisapana’s family has been responsible for the last remaining handwoven footbridge of the Incan Empire. The problem is that he may be the last in his family’s 300-year-old duty of keeping the bridge repaired.

Victoriano’s children don’t want to continue with the family responsibility, making Victoriano the last bridge master of the Incan Empire. Victoriano’s dilemma is the subject of a new film set to begin production titled The Last Bridge Master.

A successfully funded Kickstarter campaign means that now the world can know that some traditions just never die.

For 300 years, Victoriano’s family has cared for the last remaining footbridge of the Incan Empire. Now his children have the chance to leave their village. Yuri has a burning desire to travel the world, and is studying in the city while his brother Vidal is heading to the capital, Lima, as a musician and a hairdresser. Laurita is still living on the farm with her dad, walking to school every day and wondering what comes next, for her, and for her father, the last Bridge Master. For one year, we will follow them as the sons experience the wonder, the excitement, and the discrimination of the big city. At the same time, the Bridge Master forges ahead, carrying on their inherited and honored tradition. Will Laurita follow her brothers’ path away from her father and the sacred role of their ancestors? Or will she stay, in spite of a culture that does not allow women to inherit the Bridge Master role?