New study finds girls could pursue STEM careers, but they’re choosing not to

LatinaLista — As the national economy begins to transform itself to better handle its future role in a global economy, more emphasis and attention are being directed at encouraging students to major in science, technology, engineering or math (STEM) careers. 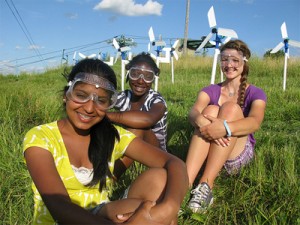 As of now, the vast majority of students who do major in STEM careers are boys. Maybe because of that, educators have chalked up the lack of girls in STEM careers to them either not being as academically prepared as their male peers to enter those fields or they’re just not smart enough.

Not true for either reason according to a new study from The University of Texas at Austin’s College of Education.

“Despite a dearth of empirical evidence, the belief doggedly persists that females don’t go into STEM majors and professions because they’ve received inadequate academic preparation or are incapable of mastering science and math material,” said Catherine Riegle-Crumb, assistant professor in the College of Education’s Department of Curriculum and Instruction and lead investigator for the study. “This research shows that that clearly isn’t the case and suggests that it’s time for scholars to investigate more promising avenues of inquiry.”

What Professor Riegle-Crumb and her team discovered combing through data from the past 30 years about the college-bound is that those students who performed in the top of their high school math and science classes, mostly boys, were the ones who usually strove for STEM careers.

Yet, what the researchers also discovered is that girls didn’t necessarily perform poorly in those subjects, they were just outperformed by the boys. However, being outperformed doesn’t mean they couldn’t or shouldn’t major in one of the STEM fields. There was no question that the girls, who still tested high in those subjects, could have handled the course work but they were choosing not to enter STEM careers.

According to Professor Riegle-Crumb that is the more important line of research that needs to be done.

“I think we instead need to be asking, ‘What do females who are highly qualified in math and science find more attractive in the fields of study they choose, and, more importantly, why are these features more attractive to them,’” said Riegle-Crumb. “Females are making a choice for something, not just against STEM majors and professions.

“These choices could be due to social structures that are pervasive and lifelong and that are shaping their preferences and ideas about what girls do versus what boys do,” Riegle-Crumb added. “One of the most fascinating questions to answer is why and how some females resist cultural expectations and do pursue degrees in engineering.”