Video: Humorous video highlights serious debate: Is voting a right or a privilege? 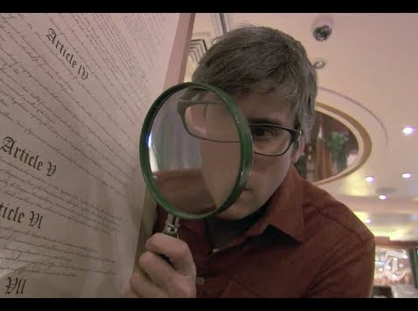 It’s just one of the startling revelations in the first episode of an Op-Docs series called “Electoral Dysfunction.” The featured video is a trailer for a longer documentary that will be broadcast on PBS stations this fall.

The film is a humorous look at the nation’s voting practices. The film stars political humorist, and former correspondent for The Daily Show with Jon Stewart, Mo Rocca.

The film opens as Mo makes an eye-opening discovery: The U.S. Constitution does not guarantee the right to vote. Mo sets out to learn why the Founding Fathers deliberately omitted the right to vote from the Constitution — and to understand the consequences of this decision. His quest leads him to Indiana, which has some of the strictest voting laws in the country…As he progresses on his journey, Mo explores the heated debate over Voter ID and voter fraud; searches for the Electoral College; gets to know a former felon who mistakenly believed she was disenfranchised for life; critiques ballot design with Todd Oldham; and encounters a range of activists, experts, and election administrators, along with some highly opinionated third graders, who offer commentary on how voting works—or doesn’t work—in America.

In another “telling” discovery, Mo discovers there are only three other countries who share the United States’ constitutional ambiguity over the right to vote: Chechnya, Libya and Iran.

In an election season where the right to vote is both under attack — with Voter ID laws — and promoted with a heavy push to register, especially Latino voters-to-be, this film sheds light on an issue that underscores an underlying debate in the country — Is voting a right or a privilege?