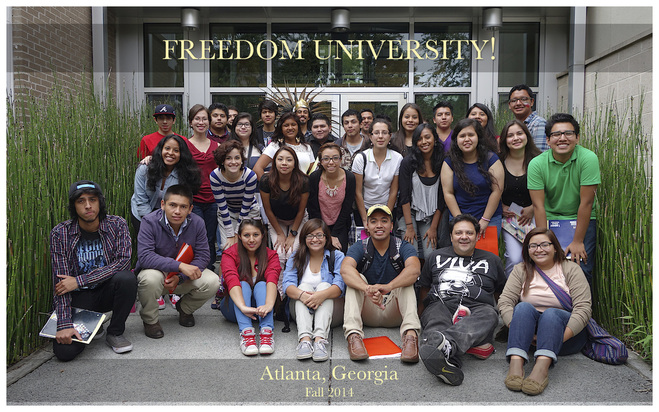 In 2010, the Georgia Board of Regents banned undocumented students from admission to the state’s top public universities simply because they are undocumented. For all other state colleges, they are charged out-of-state tuition, even though many of them grew up in Georgia and have attended public schools since kindergarten.

Because they are ineligible for federal financial aid, these policies have effectively excluded undocumented students in Georgia and ushered in a modern era of educational segregation in the South.

In 2011, a group of undocumented students, activists, and allies defied the ban and formed a modern freedom school that provides rigorous college-level classes, scholarship assistance, and leadership development for undocumented students in Georgia. A trailblazer in the movement for educational justice, Freedom University has been a tremendous success: one out of every five banned students who enters Freedom University leaves with a full scholarship to a college in another state.

It achieves this remarkable goal by preparing students for college and advocating directly on their behalf. Most importantly, it takes students beyond the borders of Georgia and into welcoming campuses for meetings with admissions staff.

Last year, Freedom University traveled to colleges throughout the northeast and the results were incredible: half of the students were admitted with full scholarships to the colleges they visited. For many of them, it was the first time ever leaving Georgia, the first time they could really imagine themselves going to college.

This autumn, they want to make the same journey.

Not only will donations provide tangible assistance toward their admission to these prestigious universities, it will also help them grow the movement for immigrants' rights. At each college they visit, they will serve as scholars and educators, and present the public panel entitled, “Undocumented in Dixie: Freedom University and the Undocumented Student Movement in Georgia.” Hearing their stories of courage in the face of discrimination creates new allies in the movement for justice in higher education.

Financial support in this tour is crucial, not only in generating a 100-fold  return on investment, but in directly transforming the life trajectories of undocumented students in Georgia, a state that has set up legal barriers to ban them from college and keep them in the low-wage labor force.