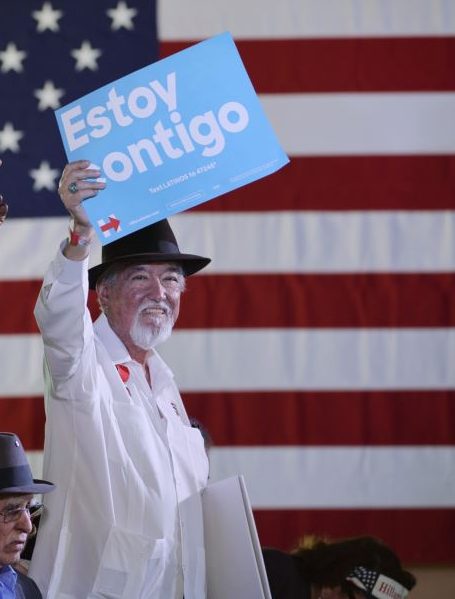 LatinaLista — Ask most Latino voters who they’ll be voting for in November and the vast majority of those quizzed will say Hillary Clinton. It doesn’t necessarily mean they like Clinton but the insulting rhetoric from her opponent about Hispanics has been enough to make most Latinos already cast a mental vote in her favor.

So, it’s not surprising that the latest survey of Latino voters by Pew Research shows that Clinton leads Trump:

Clinton’s lead among Latino voters extends across many demographic subgroups. Among millennials (18 to 35 year olds) – who make up 44% of all Hispanic eligible voters – Clinton leads 71%-19%. Her advantage is roughly as large (65%-26%) among older Hispanics (those 36 and older).

From these stats, it would appear that Latinos are “homogenous” in their support of Clinton but an interesting caveat appeared in this survey.

Clinton holds an 80%-11% lead among Hispanic voters who are bilingual or Spanish-dominant (those who are more proficient in Spanish than English); these voters make up about 57% of all Latino registered voters. However, among the smaller group of Hispanic voters (43%) who are English-dominant – those who are more proficient in English than Spanish – just 48% back Clinton (41% would vote for Trump).

Among English-dominant Latinos, there is only a seven percentage point spread between those who would support Clinton (48%) versus Trump (41%).

It’s a curious revelation. It may have something to do with another finding of the Pew survey that measured engagement.

At this point in the campaign, Hispanic voters lag all registered voters on several measures of engagement. Two-third of Hispanic voters (67%) say they have been following news about the election very or fairly closely. That compares with 85% of all voters. And while 80% of all voters say they have been giving quite a lot of thought to the election, a smaller majority of Latino voters (68%) say the same.

It could make a difference and provide a possible explanation as to why bilingual/Spanish-dominant voters heavily favor Clinton over Trump and English-dominant Latinos are split, almost evenly, in their support of the candidates.

Is this a reflection of news coverage of the candidates? Or an emerging trend among an assimilated electorate for whom politics isn’t seen as relevant to their lives?