Guest Voz: Marching towards Civil Rights has always been a 5-step process 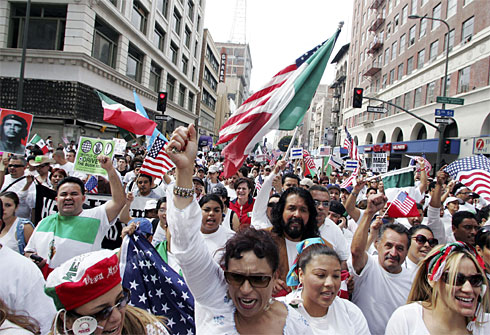 Whether patriots disguised as “Indians” or heirs of Attucks at a Woolworth’s lunch counter or drag goddesses marching down Fifth Avenue, the power of disruption has been the overwhelming tool of the otherwise oppressed in their respective marches toward equity in the American Dream. In many ways, a dream—a la Dr. King—has been the cadence along a similar set of civil steps.

Doubtless, the most visible such March has been that of colors into America’s otherwise whiteness. But, let’s not forget that the first to protest oppression in America were the continent’s original inhabitants. Atop the victory of white colonists over “Indians,” the colonials then cried out for their own rights.

Made whole in the twentieth century along arguments for full equality, civil rights for people of color have become the marquee symbol of America’s failure to reach its promise of full, equal participation.

Never mind that the culture of color has influenced the wider “popular” culture through humor, music, and fashion; some might argue that influence has become definition. Nonetheless, short of the outliers who have, against overwhelming social obstacles, achieved economic parity, there still exist barriers that make every achievement even more remarkable.

The recent obsession with which “lives matter” has disrupted American political discourse, if not city streets and other cultural moments. Nary a rally nor awards show — or even the once sacred NFL pregame exposition — is immune from the injection of the relativist statement regarding the life-colors that warrant attention.

We didn’t arrive here, in the throes of this argument, accidentally. Clearly, the rhetorical tool — “what matters” — is new, but the sentiments are rooted in centuries of American history.

The United States is, if nothing else, a series of marches toward civil rights — toward freedom. Whether punctuated by bugle calls and bayonets or highlighted by occupations and sit-ins, the cadence of milestones is generally similar:

Visibility: In a nation of 300 million, “I” deserve to stand out. “I” am an individual with my own strengths and weaknesses. If “I” join with others like me to bring attention to certain traits that we share, and for which we may otherwise be discriminated against, we assert our humanity against a set of institutions which may not naturally include us.

For some groups, like those defined by gender or race, visibility is easily achieved, indeed it is often the basest reason for discrimination in the first place. For others, along sexuality or ideological lines, the assertions are less passive. Think about pride parades and spiritual rallies.

Acceptance: Merely the second step on the road to full rights, the now-visible group is granted acceptance among the greater populous. The power gradients between the objectified group—those who’ve gained “acceptance”—and the granters-of-acceptance remain.

It implies that there is still something unequal, but for which outright and institutional discrimination is no longer tenable. Often this is hurried along as the ancillary traits that cling to the initial source of discrimination become condiments to cover up the “less palatable” traits. Think about how wrapping the rhetoric of black power in “Christian” terms or making gay rights about “love” have advanced those specific causes.

Integration: Creating space within the institutional hierarchy is the next step on the march to full rights. In many ways, this has become the standard that most societies have used as the achievement.

By “desegregating,” Americans stuck feathers in their collective cap by busing black children to white schools and by giving women the right to vote and by giving LGBT the ability to serve in the armed forces. Viewing history in the lens of the present, the question of why these are achievements, underlies the absurdity in the historical institutional failures of basic human decency.

Equality: In America, this is the yet-unfulfilled promise of our Constitutional experiment. Overcoming the institutional, economic, and cultural barriers that continue to delineate a pro-forma (de-facto) segregation between neighborhoods, opportunities, and access to power is the front line of many of the greatest fights today.

Beyond acceptance and integration, equality (implicitly, of opportunity) highlights the reality that the power of (black) words is still not equally accessible by every individual in society. Power has been concentrated within institutions that, by their nature, tend to denude the power of the individual.

The challenge of America’s next evolution is captured in the great duality between the integrated whole’s ability to do the “most good on average” which we pair against the achievements of individuals who’ve voluntarily (or by genetics) collected into groups.

Still, education stands as the grand totem to inequality. Until every child in America can achieve the same quality education — a full investment in the power of words — equality remains a chimera.

Equity: Among that small swath of those Americans who, by the birthright of their gender, color, and sexuality, are equal-from-the-start (or those who’ve achieved equality in earlier marches), there is a fight for a more “fair” distribution of scarce resources.

Thus, we see increasing arguments about how incomes are distributed, about wealth and taxation. Not baked into any constitutional promise, but omnipresent in the emerging cultural rhetoric, is the assertion that all Americans “deserve” something more than mere equality in opportunity. Equity addresses the equality of outcome.

When individuals still linger in their fights for visibility and acceptance, scheming for the redistribution of resources among the already-equal is, in itself, an unfair use of resources which should be directed toward full equality. A fair argument can be made that with full equality, equity will naturally follow.

Jason Leclerc is an internationally renowned poet (PoetEconomist.Blogspot.com), prolific blogger (SemioticArbitrage.blogspot.com), film-maker (FLAG, 2018), and political columnist (Watermark Magazine). As concerned with form as he is with quality storytelling, the author of Momentitiousness brings his socioeconomic theories to bear each day through trade. Learn more about Leclerc and his new book Black Kettle on http://momentitiousness.com/black-kettle/

equal rights, marches, people of color, protests
Previous Post The U.S. wants Costa Rica to host refugees before they cross the border. Here’s why
Next PostCrowdfunder: Argentinian trio set out to make horror film but instead make startling discovery

The U.S. wants Costa Rica to host refugees before they cross the border. Here’s why
Comment
Crowdfunder: Argentinian trio set out to make horror film but instead make startling discovery