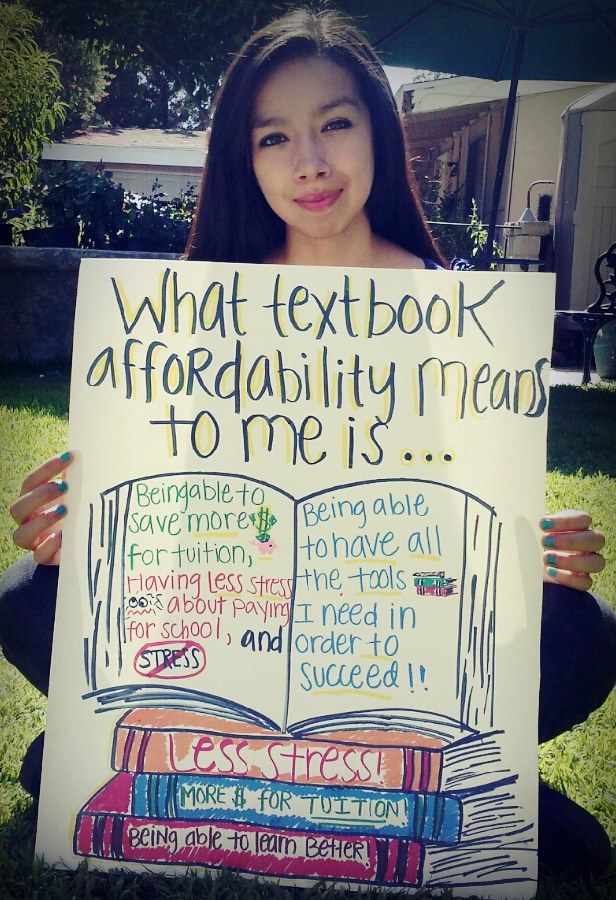 The 17-year-old psychology major from Santa Clarita Valley is the grand-prize winner of a $1,000 scholarship – beating out 130 other students from colleges across the country in in this year’s Akademos/TextbookX Textbook Scholarship Contest, the university reported in a media release.

Students were asked to upload a photo reflecting what textbook affordability means to them. Winners were chosen based on the individuality and thought behind the words and the creativity of the photo. Herrera snapped a photo on her smartphone of herself holding a sign that said: “Textbook affordability means being able to save more money for tuition, having less stress about paying for school, and being able to have all the tools I need in order to succeed!” In addition to Herrera’s first-place prize, three runner-up winners received $250 textbook scholarships.

“It’s such an honor to be chosen for this scholarship,” Herrera said. “This money will help me purchase all the tools and books I need for my courses, so I can focus on my goals of graduating from college, going to graduate school, and becoming a psychiatrist.”

Herrera, the oldest of four daughters, is…

Latest get-healthy initiative from First Lady encourages everyone to Drink Up! in bilingual campaign
Comment
Honduras: Korean-owned auto factory, with U.S. ties, under investigation for alleged abuse of labor rights