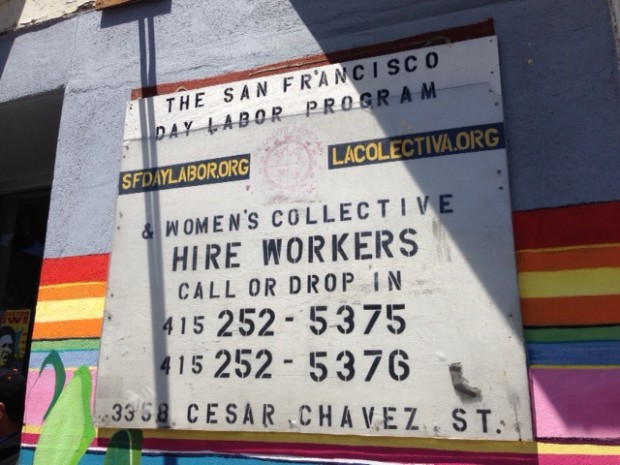 It’s a bright Thursday morning and 10 men are outside the San Francisco Day Labor Program and Women’s Collective. Inside another 30 men sit in the waiting room. A few check e-mail and Facebook on the four computers available. In the back, a thin man plucks the strings of a guitar. All of the day laborers are waiting patiently for their names to be called for work.

Although San Francisco is in the midst of a building boom, workers at the Day Labor Program, located at at 3358 Cesar Chavez Street, are still struggling. If you are lucky, said one of the workers, your name may be called three or four times in month.

“The [bad] economy that affected so many lately has been getting better, but not here. Not with us,” said Marco Figueroa, a 40-something worker.

Before the 2008 recession, Figueroa said, he worked steadily. And for a brief moment at the beginning of the poor economy there was still plenty of work because employers were seeking the cheapest labor possible, he added. But then the jobs disappeared and never really returned.

A recent report by the National Employment Law Project found that the United States has recovered from the recession’s job loss, mostly in low-wage industries. There are 1.85 million more low-wage jobs than when the recession started, according to the report. However, mid- and high-wage jobs have not reached their pre-recession levels.

This is not the case for Mission District day laborers, said Emiliano Bourgois-Chacon, director of the Day Labor Program. He said that work has not picked up for the men who seek their services – but it has for the women. Most of the women work as …

day laborers, Mission Local, unemployment
Previous Post Today's Crowdfunding Campaign: Power in Numbers
Next PostWhat is “Columbusing,” and How Can We Eliminate the Stigma of Columbus Day?

Today's Crowdfunding Campaign: Power in Numbers
Comment
What is “Columbusing,” and How Can We Eliminate the Stigma of Columbus Day?