The fitness exercise pilates, from my limited understanding of the exercise method, works on the principle of developing “a strong core or center (tones abdominals while strengthening the back), and improving coordination and balance.” The principle fascinates me because it can be applied to almost any endeavor. 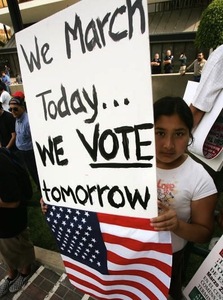 For example, when San Jose State Chicano professors approached me in 1969 with a plan to start a Mexican American Studies program at the Master of Arts (MAS) level, I responded that I did not believe that a MAS graduate program could grow without a solid undergraduate degree. My thinking was that “a strong core or center” had to be developed to allow for the coordination and balance of a large program.

The core’s abdominal muscles are the masses of students.The only programs that are subsidized in the higher education are those blessed by the institution. Logical persuasion would not develop a discipline or method to educate neglected sectors of society. You needed bodies to build the core.

I have applied this principle to politics.

Unless you have bundles of money such as the case of Republicans and you can buy elections, Mexican Americans and Latinos are not going to bring about changes in the political arena. A strong core is essential for coordination and balance to leverage this outcome.

The building of the political core does not depend as much on individual political activism as it does on the core, which is not built by electing Latino elected officials. You can have progressive representatives such as Arizona Congressman Raul Grijalva but his power although concentrated at the core can easily be isolated by the system.

In many ways Grijalva is an aberration, elected in an island of Mexican American and white liberal constituents. Even so he has problems raising political capital and he has organized successful re-election campaigns despite the Democratic National Committee whose main purpose is keeping control of the White House.

I learned this lesson in 1996. Two years before the presidential election, we organized a highly successful anti-187, the anti-immigrant proposition, march. This was the first time that over a hundred thousand Latinos took the streets of L.A. It gave us a feeling of power and many activists wanted to replicate it in 1996 in opposition to Proposition 227, the anti-affirmative action ballot measure.

Word came down that what was important was to get Bill Clinton re-elected to the White House. The California Democratic Party then proceeded to dry up funds for the march, badly dividing community activists and Latino politicos.

We never recovered and it carried over to 1998 in the fight against 227, the proposition to eliminate bilingual education. The gigantic marches were not revived until the second half of the next decade when the core was re-energized by youth and immigrants that had been politicized by 187 and by sporadic school walkouts throughout the L.A. basin. Youth could not be channeled like community organizations and labor that looked to Latino politicos for leadership and funds.

Thus, the core never developed muscle or balance and it remained dependent of the political establishment and the media.

Based on my experience I have found the core in Arizona worse off than California. The state has been kidnapped by the Republican Party with the Democratic Party leaders concentrating on keeping the White House. The rationale is “things could really get bad if Romney gets in the White House,” which is true unless you figure that things are already bad and the White House is not doing anything about it.

The Arizona experience is a valuable case study. It explains why in Mississippi where the black population numbers over a million and makes up 37 percent of the state has only one black congressman out of four.

If the Democratic National Committee would have channeled funds into Mississippi and other southern state with sizeable black populations undoubtedly the core would be stronger.

In Arizona where almost a third of the state is Latino, only two of eight congressmen are Mexican American. The Tucson Unified School District is upwards of 60 percent Latino but has two of five board members (really one).

You would think that there would be concern on the part of the National Democratic Party and that it would spearhead a restructuring of the Arizona Democratic Party to reflect its presumed progressive agenda versus that of Tea Party Republicans.

But it ain’t so. The strategy of the DNC has been to support Blue Dog Democrats who have sold out on the issues of the economy, immigration and the struggle to save Mexican American Studies in Tucson. In the process, racism has become constitutional in Arizona.

The wrongheaded strategy of the past is repeated. Everything is justified if Barack Obama is re-elected. It doesn’t matter that he has been mute on the Minutemen assassination of nine-year-old Bresenia Flores and that his Justice Department has been mute about enforcing the U.S. Constitution vis-à-vis enforcement of desegregation orders. This, according to the DNC strategy, will be rectified by making the Arizona Democratic Party more conservative and even vote with Republicans.

According to this wrongheaded strategy, it will make Obama look more palatable to right wingers.

Consequently, the Democratic Party core in Arizona is so flabby that it stands for nothing. The failure to develop the political core of the Arizona Mexican American is glaring.

Presently, a well-qualified and intelligent candidate is running for Arizona’s First Congressional District. Wenona Baldenegro is a Harvard-trained attorney. A Navajo with strong ties to the Native American and Mexican American communities, she represents the best in those groups.

Instead of supporting Wenona, the national party is supporting a reactionary Blue Dog Democrat with Tea Party ties and is actively working to sabotage her candidacy by pressuring donors not to fund her campaign.

Another example of the weakening of the core is the federal courts appointment of special master Willis D. Hawley to oversee the controversy over HB 2281 and the elimination of the highly successful Mexican American Studies Program. Without a core, Mexican Americans have been unable to check the coopting of Hawley who knows absolutely nothing about the education of Mexican American children.

I make this criticism only after of months of patient waiting. I did not want my biases toward multi-culturists to in any way affect the outcome. Blame my Catholic school training and its belief in redemption.

However, my fifty years in academe have hardened my opinion toward multiculturalists who range from friendly-touchy-feely people to arrogant academics.

Some are good scholars. They want a better society. But, many think that they know more about what is good for minorities than minorities themselves.

I have had to fight them in committees because they failed to see the necessity for Chicanos to determine their own pedagogies. Consequently, they have undermined Chicana/o and African American Studies programs because they see no need for them to build their cores.

If you want a Chicano, African American or an Asian American center, their solution is, let’s save money and throw you all into a multi-cultural center.

Self-determination is not a nationalist demand; it is the aspiration of every living person. Communities should determine their futures and the role of political parties is not to manipulate them but to strengthen them.

Perhaps if our political cores were stronger, the Democratic Party would not sell us out as in Arizona and other states.

With this said, like in the days of the Romans, we don’t have to worry. Our cores will get fat and flabby as we get free bread and circuses during Cinco de Mayo. People will celebrate it without knowing its historical message which was that Mexico was not open to foreign colonialism and that the separation of church and state was the law of the land.

But, this is too much exercise. Too much to think about. Let’s bring on the beer; enjoy the jarabe tapatio; and let the mariachis blare. Enjoy the smiling politicos and the Obamas talk about how Americans are exceptional.

Democrats, featured, GOP, Latino voters, politics
Previous Post How Clinical Psychology is Improving our Understanding of Internet Addiction
Next PostSpotlight Nonprofit: Giving teen moms the "hope" of a better future with help to get through college

How Clinical Psychology is Improving our Understanding of Internet Addiction
Comment
Spotlight Nonprofit: Giving teen moms the "hope" of a better future with help to get through college