Bienvenidos to our world, Mainstream Media 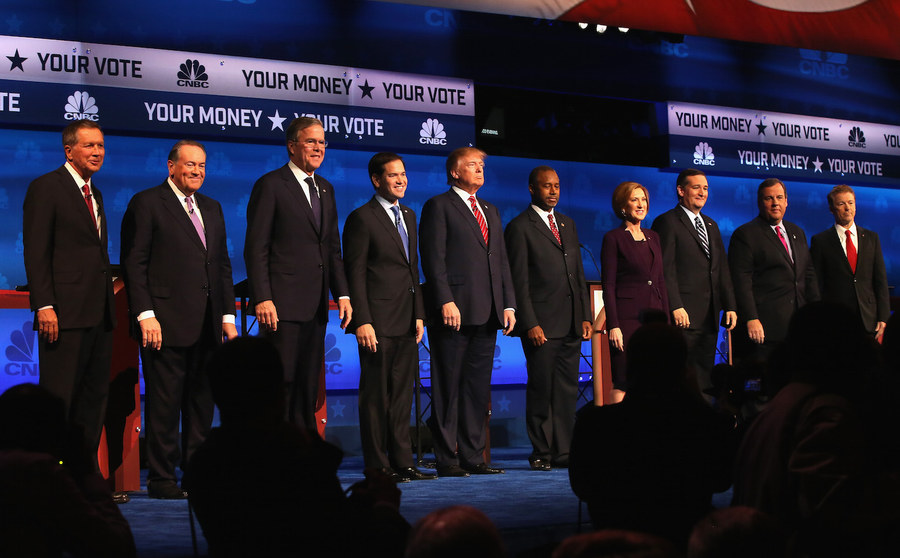 The post-analysis of last night’s GOP debate, hosted by the cable finance channel CNBC, has been as much about the candidates lashing out at the moderators (a.k.a. the media) as how they answered the questions.

The notion, as Sen. Ted Cruz implied, that the questions asked were meant to illicit a “cage match” response among the candidates rather than discover how they would govern would have had a lot more credence had:

Anyone who has watched the debates so far knows that the candidates have only themselves to blame if the American people have come to see the GOP debates as entertainment and the political version of American Gladiator.

In that respect, last night’s debate was nada nuevo but what was surprising was what appeared a coordinated attack against the media.

From the first debate when Trump couldn’t let his irritation go at Fox News’ questioning, it appears more and more of his colleagues have joined his bandwagon of beating up on the media – bienvenidos mainstream media to the ranks of scapegoats.

To stay in the good graces of a particular segment of their electorate, a GOP tactic is to seize a particular group or issue and vilify the hell out of it to enrage their followers. Just so they can deliver tough rhetoric on the campaign trail that has the potential to boost their poll standings and guarantee applause.

Until now, the most popular scapegoats have been undocumented Latino immigrants (however, it’s been an attack on all Latinos since there’s no visible distinction between the undocumented and citizens), Planned Parenthood, Muslims, and a few others.

Being labeled, lied about and linked to a list of reasons of what makes America weak — Mexican undocumented immigrants are rapists and murderers who are stealing our jobs; Planned Parenthood is nothing but abortion factories; Allowing Muslims to live in the U.S. is an open invitation to ISIS – is proving an effective tactic in dividing the country and getting GOP votes.

Many media analysts have determined that CNBC was the big loser in the debate, though the reason isn’t entirely clear. Was it because they tried to reign in 10 egos to adhere to time limits? Was it because they asked sensitive questions that dealt with the candidates’ sense of morality, governance and leadership? Or was it because they were the media outlet who scored hosting duties of a nationally televised event?

The way I see it the big loser in last night’s debate was our democracy. The media’s role has historically been to question the motives, credentials and past actions of public officials, wannabe public officials and anyone in the public eye who wants the money, admiration and influence that such a position brings.

The lashing of the media by some of the candidates for doing their job to make candidates accountable for the decisions in their lives thus far, a pre-requisite to being Commander-in-Chief, is a sad commentary on how these candidates view a free press in our democracy.

We have only to look at those countries where press freedoms are reviled and discredited – like what happened last night – to see that in those same countries impunity and corruption run rampant, and retaliation against the media is a deadly, daily occurrence, all because political officials with sensitive egos control what’s being said in their media.

Perhaps Sen. Cruz unknowingly hit on the core of the issue best when he scapegoated the media with: “The questions that have been asked so far in this debate illustrate why the American people don't trust the media.”

I would say it wasn’t the questions that caused the mistrust, but the answers — that in some cases, never came.

Marisa Treviño is the publisher of Latina Lista.