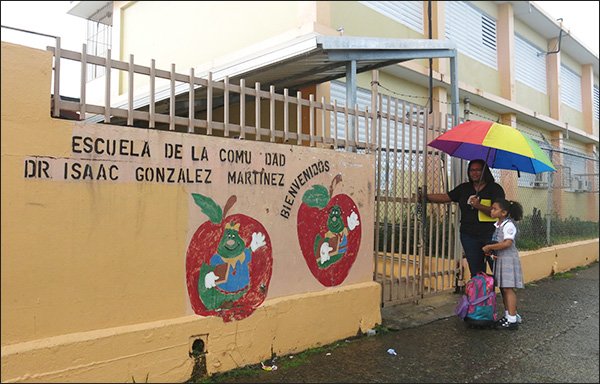 Educators in Puerto Rico are getting support from the American Federation of Teachers in their efforts to thwart a plan to close schools as a way of helping the island deal with its financial crisis.

AFT president Randi Weingarten sent a letter in April to the Financial Oversight and Management Board for Puerto Rico urging them “not to make devastating funding cuts to the education system that serves the 379,000 students in Puerto Rico.” The federal fiscal board is overseeing Puerto Rico’s efforts to deal with bankruptcy and resolve its debt.

“In 2015 alone, more than 3,000 teachers left Puerto Rico,’’ according to the letter. “Since districts in the United States are recruiting Spanish-speaking teachers, there are few English, math and science teachers left in Puerto Rico. And conditions are dire for the thousands of children with disabilities who are missing out on receiving special education services.”

AFT members also participated in a rally with Puerto Rican teachers in March in New York during one of the fiscal board’s meetings. AFT has 1.6 million members. In addition, AFT passed a resolution in May in solidarity with the Puerto Rican Teachers Association. It reads in part: “As a result of the financial emergency in Puerto Rico, the educators, students and families of Puerto Rico are facing the threat of 184 school closings—which will displace some 27,000 K-12 students and 2,088 educators.”

In a global education test, Puerto Rican students underperformed with scores below the international average and the average in the United States in science, reading and math. More than half a million 15-year-old students in about 70 nations and educational systems took part in the 2015 Program for International Student Assessment, or PISA, study.

Featured Photo: Ana Sanchez and her 8-year-old daughter, Naiyari, lock the gates of the Dr. Isaac Gonzalez Martinez school in San Juan, Puerto Rico. The school is one of 179 closed in May amid an economic crisis in the U.S. territory. It is the second time in two years that a school that Naiyari attends will be closed.